This is a recombinant Borrelia burgdorferi OspB protein, fused to an MBP-tag and produced in E. coli (>90% purity).

OspB is encoded by the spirochete B. burgdorferi, which is carried by Ixodes ticks. Strain B31 is the type strain (ATCC 35210) for this organism and was derived by limited dilutional cloning from the original Lyme-disease tick isolate derived by A. Barbour (Johnson, et al., 1984).

Many of the borrelial surface antigens, including OspB, are lipid-modified proteins (i.e. lipoproteins), although a number of these surface-exposed lipoproteins (OspA, OspB, and OspC) are not found exclusively on the surface of the organism. They are also detected in the periplasm of the organism and can be shuttled to and from the borrelial surface at different points during infection (Haake, 2000). The 31 kDa OspA and 34 kDa OspB proteins, show a high degree of sequence similarity, are encoded by a 49-kb plasmid, sharing a common promoter and are co-ordinately transcribed (Liang, et al., 2004).

OspA, OspB, and OspD are expressed by B. burgdorferi residing in the gut of unfed ticks, suggesting that they promote the persistence of the spirochete in ticks between blood meals. OspB has a contributing role in the adherence of B. burgdorferi to the tick gut. The C terminus of OspB is also important for eliciting a protective immune response to OspB and B. burgdorferi has the ability to vary its surface proteins in response to immune attack (Neelakanta, et al., 2007).

The interface between B. burgdorferi and its human host is its outer surface (and therefore proteins localized to the outer membrane) play an important role in dissemination, virulence, tissue tropism, and immune evasion. Antibodies directed against outer surface proteins have also been shown to protect animals and humans from infection with B. burgdorferi (Kenedy, et al., 2012). 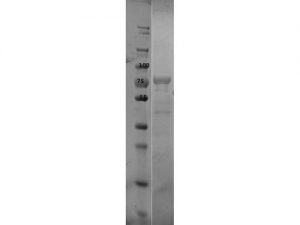