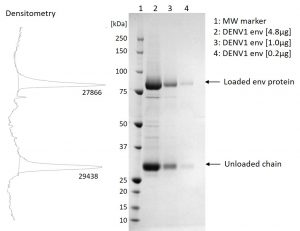 Dengue virus serotype 1 Envelope protein (E protein) has been manufactured in HEK cells in response to the unmet need for highly purified, concentrated protein for use in serological based diagnostic assays. Sequence corresponds to amino-acids 281-677 of the polyprotein. The transmembrane portion of the wildtype protein has been replaced with a glycine-serine linker coupled to human IgG1 Fc. The fusion protein was co-expressed with the corresponding unloaded human IgG1 Fc chain.

Dengue is caused by any one of four related viruses transmitted by mosquitoes. It is a febrile illness that affects infants, young children and adults with symptoms appearing 3-14 days after the infective bite. Symptoms range from mild fever, to incapacitating high fever, with severe headache, pain behind the eyes, muscle and joint pain, and rash. There is no vaccine or any specific medicine to treat dengue. Severe dengue (also known as dengue hemorrhagic fever) is characterized by fever, abdominal pain, persistent vomiting, bleeding and breathing difficulty and is a potentially lethal complication, affecting mainly children. Early clinical diagnosis and careful clinical management by trained physicians and nurses increase survival of patient.