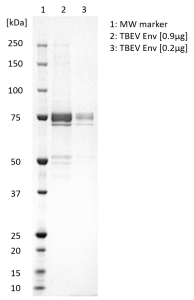 Tick-borne encephalitis (TBEV) is a human viral infectious disease involving the central nervous system with an increasing number of cases being reported world-wide. TBEV virions are spherical enveloped particles with an envelope comprising two proteins; the envelope (E) protein, which is organized into dimers and a smaller membrane (M) protein. Inside the envelope is the nucleocapsid, which consists of multiple copies of the capsid (C) protein and a single copy of the viral genome. The virus genome is an ~11kbp positive-strand RNA ( RNA) which encodes three structural proteins (C, prM, E), and seven nonstructural (NS) proteins. The viral proteins are encoded in a single open reading frame that is co- and post-translationally cleaved by viral and host proteases (Knipe & Howley, 2013).

The E glycoprotein is the major component of the mature TBEV particle and consists of four domains. Domain II contains the only glycosylation site of the mature virus (Asn154), which has a role in egress from mammalian cells, as well as neurovirulence. At its tip, domain II also contains a region that is responsible for the fusion of the viral and host membranes in the final stages of TBEV entry. Domain III has been proposed to function in the binding to host receptors, but no residues directly responsible for entry have been identified. Antibodies against domain III have been found in the sera of patients and laboratory animals after infection or vaccination.

Protein E is responsible for the induction of a protective immune response, making it a good candidate for vaccine development and diagnostic use.