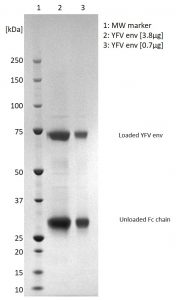 Recombinant Yellow Fever virus Envelope protein sequence corresponds to amino acids 287-678 of the polyprotein. The transmembrane portion of the wildtype protein has been replaced with a glycine-serine linker coupled to a human IgG1 Fc chain that carries mutations allowing for a monovalent Fc dimer. The second Fc chain carrying the complementing mutations is not loaded with antigen.

Translation of the positive-stranded viral genomic RNA in infected cells results in the synthesis of a polyprotein precursor of 3411 amino acids, which when proteolytically processed, generates 10 viral proteins. These are (from the amino- to carboxi-terminus of the precursor polyprotein): C; prM/M; E; NS1; NS2A; NS2B; NS3; NS4A; NS4B and NS5. The first three are viral structural proteins that form the virus particle together with the RNA molecule, namely capsid (C, 12–14kDa), membrane (M of 8 kDa, its precursor prM of 18–22 kDa), and envelope (E, 52–54 kDa). These are encoded in the first quarter of the genome. The remainder of the genome encodes the non-structural proteins (NS), numbered from 1 to 5 (NS1 to NS5) in accordance with the order of synthesis.

Native E protein forms homodimers and it undergoes conformational rearrangement into a fusogenic homotrimer after entering cells by receptor-mediated endocytosis. This conformational change occurs in the lower pH environment of the endosome where viral lipid envelope fusion with endosomal membrane, releases the nucleocapsids into the cells cytoplasm. Each E protein monomer has a molecular mass of 50-55 kDa and has three distinct domains: domain I, II and III. Domain III is the immunoglobulin-like receptor binding domain and is recognized by virus-neutralizing antibodies, making it a target for diagnostic assays.

Yellow fever continues to be a public health concern inmany countries of Africa and the Americas. It is estimated that 200 000 cases and 30 000 deaths are attributable to yellow fever annually. The Yellow Fever Virus Envelope protein has been manufactured in response to the need for a highly purified, concentrated protein for use in further vaccine development and serological based diagnostic assays.