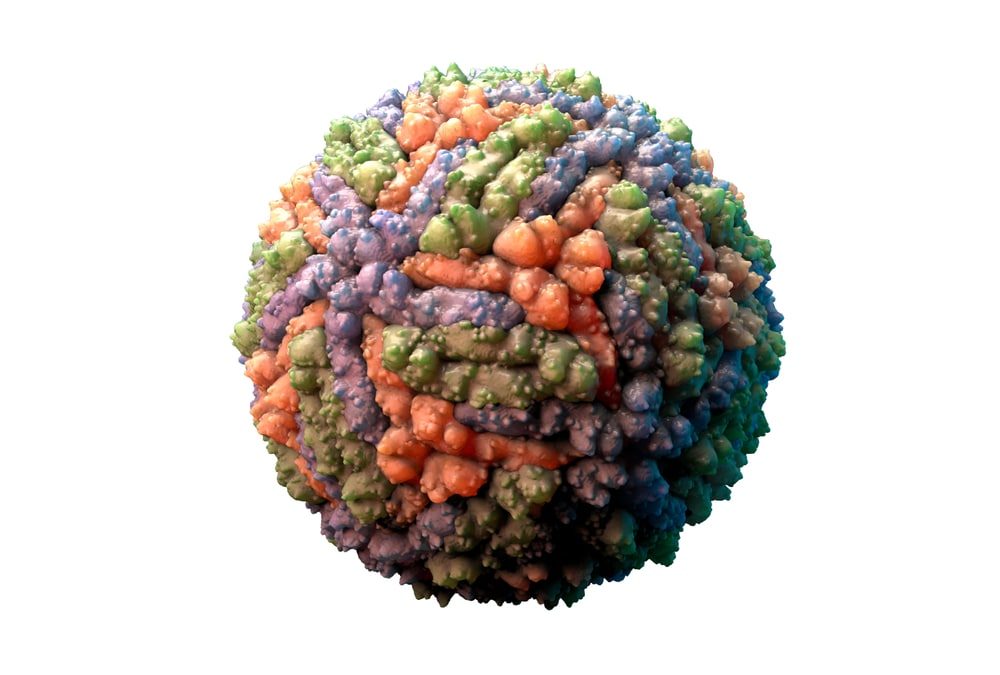 In this blog, we discuss the structure and function of Flavivirus Envelope protein, its ability to elicit a broad range of antibody responses, and present our new range of Dengue virus Envelope DIII proteins for diagnostic and vaccine development.

Envelope Protein: A Quick Overview
The Dengue virus (DENV) envelope protein is a 53kDa glycoprotein that forms head-to-tail dimers in an icosahedral 90-mer at DENV’s surface, constituting the viral capsid, along with Capsid protein (as seen above) [1]. The Envelope protein can be divided into three distinct domains: Domain 1 (DI), domain 2 (DII) and domain 3 (DIII).

Envelope protein homodimer, with domains I, II and III labelled; The DII fusion peptide is highlighted in magenta [2].

As the major flavivirus surface protein, Envelope performs various functions in viral pathogenesis, as well as providing DENV with its structural integrity. Envelope is the first point of contact for DENV with its host cell when it binds a cell surface receptor and is endocytosed. Once inside the host cell, Envelope proteins respond to the reduced pH of the endosome with a large conformational rearrangement. This rearrangement provides the energy required to fuse the endosome membrane with the viral envelope membrane, inducing membrane fusion and releasing viral RNA into the cytoplasm for replication [6].

With an overall sequence identity of 54%, Envelope protein is highly conserved between the flaviviruses [7], which makes it one of the major surface proteins responsible for eliciting cross-reactive antibody responses [8]. This has resulted in significant complications in the research and development of anti-flavivirus countermeasures, especially for the co-circulating Dengue and Zika viruses.

Domain 3
Unlike other Envelope regions, DIII shows a unique combination of both high and low sequence conservation across its structure. This has allowed DIII to elicit antibodies that show considerable variability in their serotype-specificity [9], domain specificity [10] and neutralising ability [11]. Studies have shown for example, that DIII’s ‘EXE/DPPFG’ region is an immunodominant epitope which is highly conserved among the flaviviruses and elicits highly cross-reacting antibodies [12][13]. Alternatively, residues 386–397 of DENV-2’s DIII elicit the 3H5 antibody that shows serotype specificity and neutralising ability [14]. The ‘HHWH’ epitope of DIII has only been identified in JEV and WNV, and therefore does not elicit antibodies that react with other flaviviruses [15].

The ability of DIII to induce a range of antibody characteristics has made it a viable target for diagnostics, therapeutics and vaccines. DIII’s serotype-specific epitopes can considerably improve diagnostic accuracy, while DIII’s ability to elicit broadly neutralising, cross-reacting antibodies may provide a means of treating and immunising against multiple DENV serotypes [16].

DIII has been used in conjunction with so-called ‘epitope-focusing’ mutational strategies which ablate undesirable epitopes while maintaining the structural fingerprints of those that are desired [17]. Combined, DIII can be used to clearly discriminate antibody responses between flavivirus infections in ELISA and has shown improvements over assays that use whole Envelope protein [18, 19, 20].

New Dengue Virus DIII Envelope Proteins
To support ongoing research into Dengue virus diagnostics and vaccines, The Native Antigen Company now provides DIII Envelope proteins for all four Dengue virus serotypes. These peptides are expressed in E. coli, which have shown to produce DIII antigens that elicit specific and robust immune responses [21, 22]. These antigens are suitable for use in Western blots and the development immunoassays for diagnostic and vaccine research: