Dengue fever is ranked by the World Health Organization (WHO) as the most critical mosquito-borne viral disease, globally. More than 40 percent of the world’s population, in more than 100 countries are at risk of dengue infection. The most significant dengue epidemics in recent years have occurred in Southeast Asia, the Americas and the Western Pacific. Each year, an estimated 390 million dengue infections occur around the world. Of these, 500,000 cases develop into dengue haemorrhagic fever – a more severe form of the disease, which results in up to 25,000 deaths annually.

The Native Antigen Company have an extensive range of Dengue virus proteins, prepared in our mammalian cell expression system, complemented by an array of highly specific monoclonal antibodies. These reagents are widely used by IVD and pharmaceutical companies in manufacturing and R&D.

Dengue virus (DENV) is a single-stranded RNA virus that belongs to the genus Flavivirus, which includes the Zika virus, West Nile virus and Japanese Encephalitis virus. Dengue virus infection is transmitted to humans by mosquitoes, primarily the Aedes aegypti species. It is a febrile illness that affects infants, young children and adults with symptoms appearing 3-14 days after an infective bite. Symptoms range from a mild, to incapacitating high fever, with severe headache, pain behind the eyes, muscle and joint pain, and rash. Severe dengue (also known as dengue haemorrhagic fever) is a potentially lethal complication that is characterised by fever, abdominal pain, persistent vomiting, bleeding and breathing difficulty (1). Dengue virus infection is caused by any one of four related viruses, DENV-1, DENV-2, DENV-3 and DENV-4, also referred to as Dengue serotypes, which co-circulate in endemic areas. Infection with one dengue serotype confers lifelong immunity but subsequent infection with other dengue serotypes is associated with an increased risk of developing severe dengue disease. Early clinical diagnosis and careful clinical management are essential for increasing patient survival.

Dengue is an emerging disease and a leading cause of illness and death in the tropics and subtropics, with more than one-third of the world’s population living in areas at risk of infection (2). Currently, there is no antiviral therapy for the treatment of dengue or severe dengue disease. Prophylactic vaccines are in development and the first dengue vaccine, Dengvaxia (CYD-TDV) a live recombinant tetravalent vaccine by Sanofi Pasteur, was licensed in Mexico in December 2015, with several other vaccine candidates in clinical or pre-clinical stages of development (3).

Early diagnosis of dengue and dengue serotypes is a vital step in patient management. However, many of the proteins expressed by Flaviviruses are very similar and serological testing is complicated by problems of cross-reactivity. In this context, the use of highly purified antigens, that are glycosylated and natively folded are crucial in the development of accurate and reliable immunoassays.

We offer an extensive range of Dengue antigens, all expressed as recombinant proteins in our mammalian expression system. Dengue NS1 proteins are available for all four serotypes and were the world’s first commercially available mammalian-expressed NS1 proteins. They are also endorsed by the Division of Infectious Disease & Vaccinology, University of California, Berkeley.“In our hands, NAC’s DENV NS1 proteins have performed extremely well in a range of applications and have helped advance our research program.”  Professor Eva Harris.


We also offer a full panel of Dengue virus-like particles (VLPs) – intact particles comprising 180 copies of envelope and prM/M proteins. Our VLPs have been extensively analysed by Metz et al. in 2018, demonstrating that they are antigenically comparable to native Dengue virus. To complement our NS1 and VLP proteins, we have also developed a panel of soluble Dengue virus Envelope proteins.

The Native Antigen Company is pleased to offer a full panel of serotype-specific antibodies to Dengue NS1, which are suitable for the development of serotype-specific immunoassays. These antibodies have been raised against our renowned mammalian-expressed, recombinant NS1 proteins. They show no cross-reactivity with other serotypes of Dengue, or other flaviviruses including Zika, Yellow Fever and West Nile.

In addition to NS1-specific antibodies, we offer a number of additional antibodies specific for envelope and membrane proteins.

We are pleased to offer ELISA assays for the detection of antibody response (IgG and IgM) to Dengue virus. These assays are suitable for use in laboratory research and development activities and vaccine research studies. 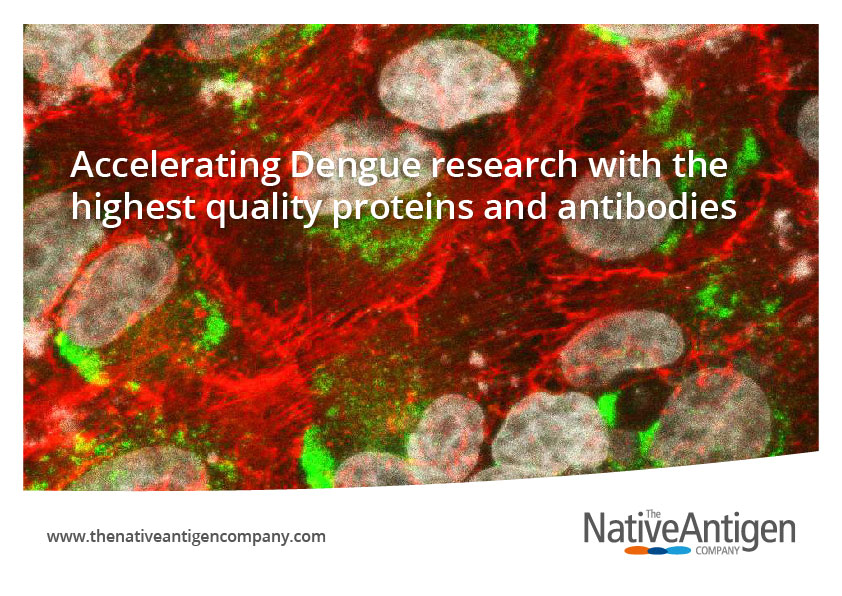 Accelerating Dengue research with the highest quality proteins and antibodies

A major challenge faced by academic researchers, drug developers and public health scientists is Dengue’s close structural similarity to the Zika virus – which continues to hamper research efforts, requiring more sensitive diagnostic tools to differentiate between them. In this eBook, we discuss these challenges and how they can be overcome with high quality reagents.
Download your eBook

Check out our FAQ section for answers to the most frequently asked questions about our website and company.

In this blog, we speak with Dr. David Flavell about his scientific career, the legacy of Leukaemia Busters, and the recent impact that COVID-19 has had on his research.Tell me about your scientific background David. I was born in a seaside town called Southport in...
Read More

In the second of a three-part series on COVID-19 vaccines, we explore the potential challenges in stimulating safe vaccine responses and outline the role that diagnostics will play in guiding their development.Rogue Responses Antibodies play a crucial role in...
Read More

The Bumpy Road to a Cytomegalovirus Vaccine

The development of a cytomegalovirus vaccine has been 50 years in the making. Are there any technologies in the pipeline that could prompt a breakthrough? This article was originally posted online at The Medicine Maker, a Texere publication.To say that...
Read More

Why We Need Antigen and Antibody Tests for COVID-19

RT-PCR is the workhorse of viral diagnosis and has been invaluable in COVID-19 case confirmation and isolation guidance. However, while fast and sensitive, PCR suffers from some inherent drawbacks that limit it to diagnosis during the acute phase of infection. To...
Read More

This article was written by our friends at Infectious Diseases Hub, a free-to-access website that aims to deliver up-to-date, essential research and information on all aspects of microbiology, virology, mycology and parasitology – from bench to bedside....
Read More