Zika virus has recently attracted world-wide attention due to a very large outbreak in Brazil in 2015/2016, which rapidly spread across South America, into the Caribbean and to the southern states of the US.

Zika virus (ZIKV) is an emerging disease, spread by Aedes genus of mosquitoes. The virus was first isolated in Central Africa, and has since spread to South Asia and South America. Outbreaks were reported in Micronesia in 2007 and in Brazil in 2015, confirming at least 13 autochthonous infections. The Zika virus outbreak in Brazil in 2016 has gained world-wide attention and has been linked to an increasing number of microcephaly cases. In April 2016, the Centers for Disease Control and Prevention confirmed the link between ZIKV infection of the foetus with microcephaly (CDC).

Analysis of ZIKV sequences from infected patients have shown that the strain circulating in South America in 2015 differs to the strain originally isolated in 1947 in Uganda (the ‘Uganda’ strain). The South American strain was first isolated and sequenced from a patient in Suriname, and hence is known as the Zika Suriname strain (Enfissi, A).

We offer an extensive range of Zika virus antigens, expressed as both recombinant proteins in our mammalian expression system and as native viral preparations.

Zika NS1 proteins are available from both the prototypic Uganda strain, and from the Suriname strain, responsible for the major outbreak in 2016. Our Zika proteins are fully glycosylated and are in hexameric format. We also offer Zika virus-like particles (VLPs), which are intact particles comprising 180 copies of Envelope and prM/M proteins. These have been extensively analysed demonstrating that they are antigenically similar to native Zika virus. To complement our Zika NS1 and VLP proteins, we also offer soluble Zika virus Envelope protein.

Our products derived from native Zika virus are prepared from infected cell cultures, and include whole cell lysates alongside sucrose-density gradient purified virus.

We are also pleased to offer chimeric versions of one of the mouse monoclonal antibodies in human IgG and IgM format. These reagents can be used as defined controls in serological assays for Zika virus infection.

We are pleased to offer two ELISAs for Zika virus research, whose development has benefited from our in-house expertise in Zika virus biology and reagent preparation.

A capture assay to measure levels of Zika virus NS1 protein in serum, plasma and urine is available, with the highest sensitivity of any assay commercially available, detecting NS1 to levels as low as 5pg/ml. We also offer a serological assay for the detection of total antibody response (IgG IgA and IgM) to Zika infection. This assay is designed for immunosurveillance applications and has extremely high specificity in areas of endemic Dengue infection, where cross-reactivity has been a significant problem with early commercial zika assays. The novel format of this assay provides results in only 100 minutes, and it is also suitable for use in all species.

We also offer an IgM assay designed for the detection of Zika-specific IgM antibodies in human serum. It is minimally cross-reactive with antibodies to Dengue virus (a closely-related flavivirus), and so can be used to distinguish human anti-Zika antibodies from other flavivirus and infectious disease antibodies. 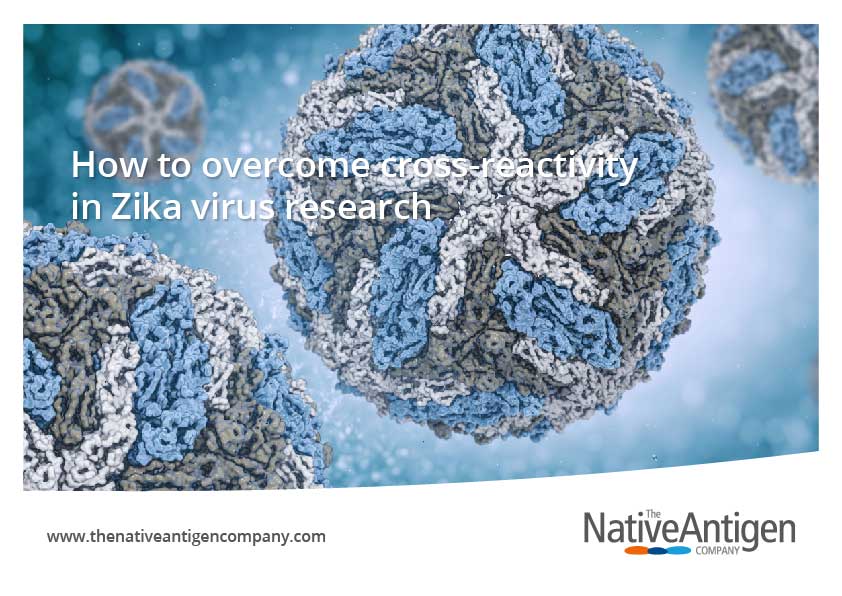 How to overcome cross-reactivity in Zika virus research

In this eBook, we discuss the main issues to studying Zika virus and the ways in which academic, pharmaceutical and public health institutes can overcome the cross-reactivity challenge in Zika virus research.

Check out our FAQ section for answers to the most frequently asked questions about our website and company.

Why We Need New Diagnostics for the Zika Virus

This article has been published in Volume 2, Issue 3 of the IBI journal.While Zika is no longer in the public eye, it hasn’t vanished. Recent outbreaks across Asia and Africa are reminders that Zika is alive and well, and with no effective countermeasures...
Read More

In this blog, we discuss the structure and function of Flavivirus Envelope protein, its ability to elicit a broad range of antibody responses, and present our new range of Dengue virus Envelope DIII proteins for diagnostic and vaccine development.Envelope Protein: A...
Read More

The Native Antigen Company first gained prominence in 2016, when it developed highly pure Zika virus NS1 protein during the 2015/2016 epidemic. Since then, the company has developed an extensive range of highly specific antigens, antibodies and immunoassays for...
Read More

In the first of a two-part series, we describe the structure of Flavivirus Non-Structural Protein 1 (NS1) and the role that it plays in viral pathogenesis. Flavivirus proteins Flaviviruses are single-stranded, enveloped RNA viruses, belonging to the Flaviviridae...
Read More

While the 2015/16 Zika epidemic no longer makes the headlines, there remains a crucial need to accurately and reliably diagnose Zika virus (ZIKV) infection to identify and manage further outbreaks. However, high levels of cross-reactivity among cocirculating...
Read More