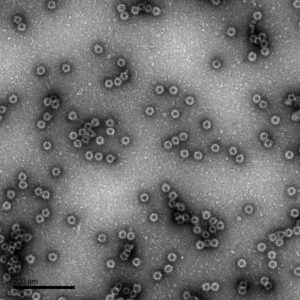 Parvovirus VP2 protein is a unique product that has been developed in response to the need for high purity, properly assembled Parvovirus antigens for use in the development of Parvovirus diagnostics and in vaccine development and R&D (including use as an immunogen). Parvovirus VP2 is produced in the form of Virus-like particles (VLP) in human cell lines using state-of-the-art expression techniques. Concentration and purification is then performed by a series of ultracentrifuge and precipitation methods which result in VLPs of exceptional quality and purity. The VP2 protein runs as a 60kD band on reducing SDS-PAGE.

Virus-Like Particles (VLPs) are an emerging vaccine technology. VLPs consist of protein shells comprising outer proteins specific to the virus in question. VLPs are more representative of how viral antigens are presented in vivo and whilst they are highly immunogenic they are non-infectious as they lack the core genetic material of the virus. Another important advantage of VLPs is that they more effectively activate key aspects of the immune response to achieve potent immune stimulation and to provide immunological memory. VLP-based vaccines have also shown to provide effective protection and are in current use for several diseases and in development for many others.

Parvovirus disease in humans is generally a mild disease, which is sometimes known as Fifth Disease. It is characterised by a rash, which may be particularly prominent on the face and is sometimes known as a “slapped cheek rash”. Other symptoms are similar to those of the common cold, which usually precede the rash. In more severe cases there may be pain and swelling of the joints. The most serious potential side effect is anaemia caused by a decrease in erythropoiesis, which is a particular risk in immunocompromised patients. There is also a risk of miscarriage (approximately 10%) if a mother is infected in the first half of pregnancy. Parvovirus infection is spread by respiratory secretions, and is most contagious in the early stages of infection before a rash is present.