CRM197 is a genetically detoxified diphtheria toxin. It is expressed as a soluble, correctly folded ~58kDa recombinant protein in the cytoplasm of E. coli and then produced to >99% purity. 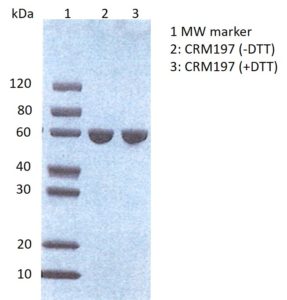 Diphtheria toxin, CRM197 mutant is a genetically detoxified diphtheria toxin. It is expressed in the cytoplasm of E. coli as a soluble, correctly folded ~58kDa recombinant protein and then produced to >99% purity.

Since its discovery in 1888, Diphtheria toxin has become one of the most extensively studied toxin molecules. Diphtheria toxin CRM197 mutant is a recombinant, genetically detoxified diphtheria toxin. It contains a single base change in the structural gene resulting in the substitution of glutamic acid for glycine which blocks ADP-ribosylation (Pappenheimer et al., 1972). CRM197 has no enzymatic activity but is immunologically indistinguishable from diphtheria toxin.

CRM197 is widely used as a carrier protein in conjugate vaccines, including effective conjugate vaccines against Streptococcus pneumoniae, Haemophilus influenzae b and Neisseria meningitidis (meningococcus). Carrier proteins are used to convert polysaccharides from T-cell independent antigens, into T-cell dependent antigens by linking the two together.  They are also used to improve the immunogenicity of oligosaccharides, peptides and proteins (Benaissa-Trouw et al., 2001). A potential advantage of CRM197 over toxoided proteins is that, because it is genetically detoxified, it retains its full complement of lysine amines for conjugation. There is also evidence suggesting that, compared with tetanus toxoid, there is less carrier-induced suppression of the immune response, especially when there are many individual polysaccharides linked to the same carrier protein.