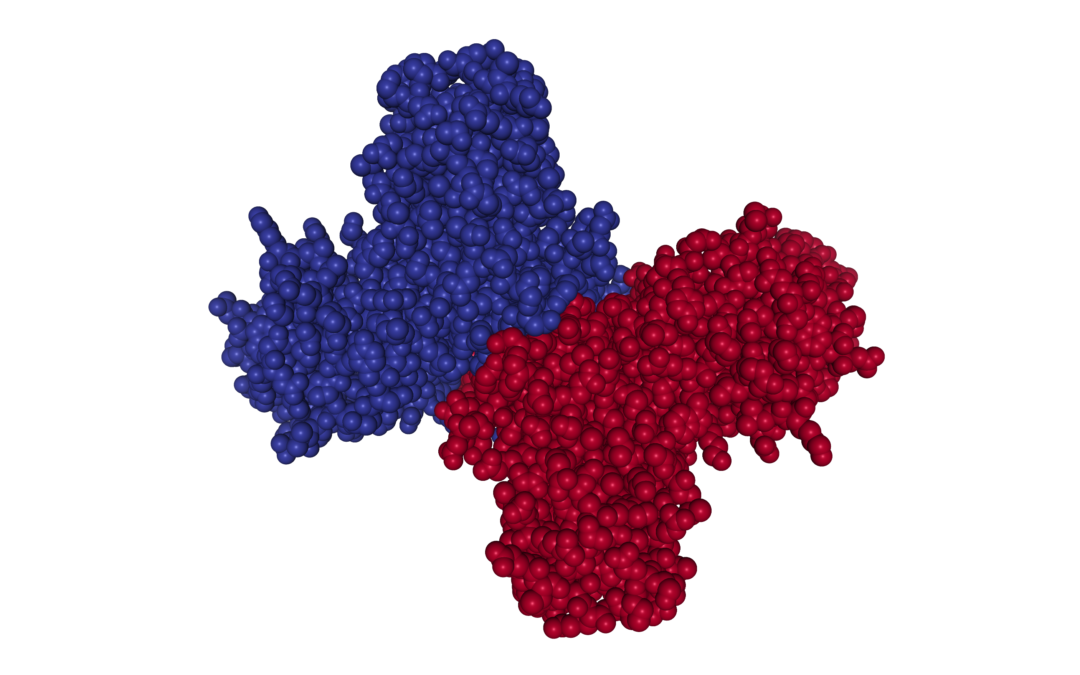 In the first of a two-part series, we describe the structure of Flavivirus Non-Structural Protein 1 (NS1) and the role that it plays in viral pathogenesis.

Flaviviruses are single-stranded, enveloped RNA viruses, belonging to the Flaviviridae family. Their positive-sense RNA genomes have a 5’ cap (7mG) and 3’ CU-OH conserved tail which are directly translated into a single polypeptide chain in the cytoplasm of infected cells. This polypeptide is co- and post-translationally processed by both host and viral proteases to produce 3 structural and 7 non-structural proteins. The structural proteins include: Membrane protein, which stabilizes the capsid and assists in folding and secretion of envelope protein, Envelope protein, which binds the endosomal membrane of the host cell to initiate endocytosis, and Capsid protein, which binds viral RNA to assemble the nucleocapsid and interacts with cellular proteins to modulate signaling pathways that divert metabolism and inhibit immunorecognition. 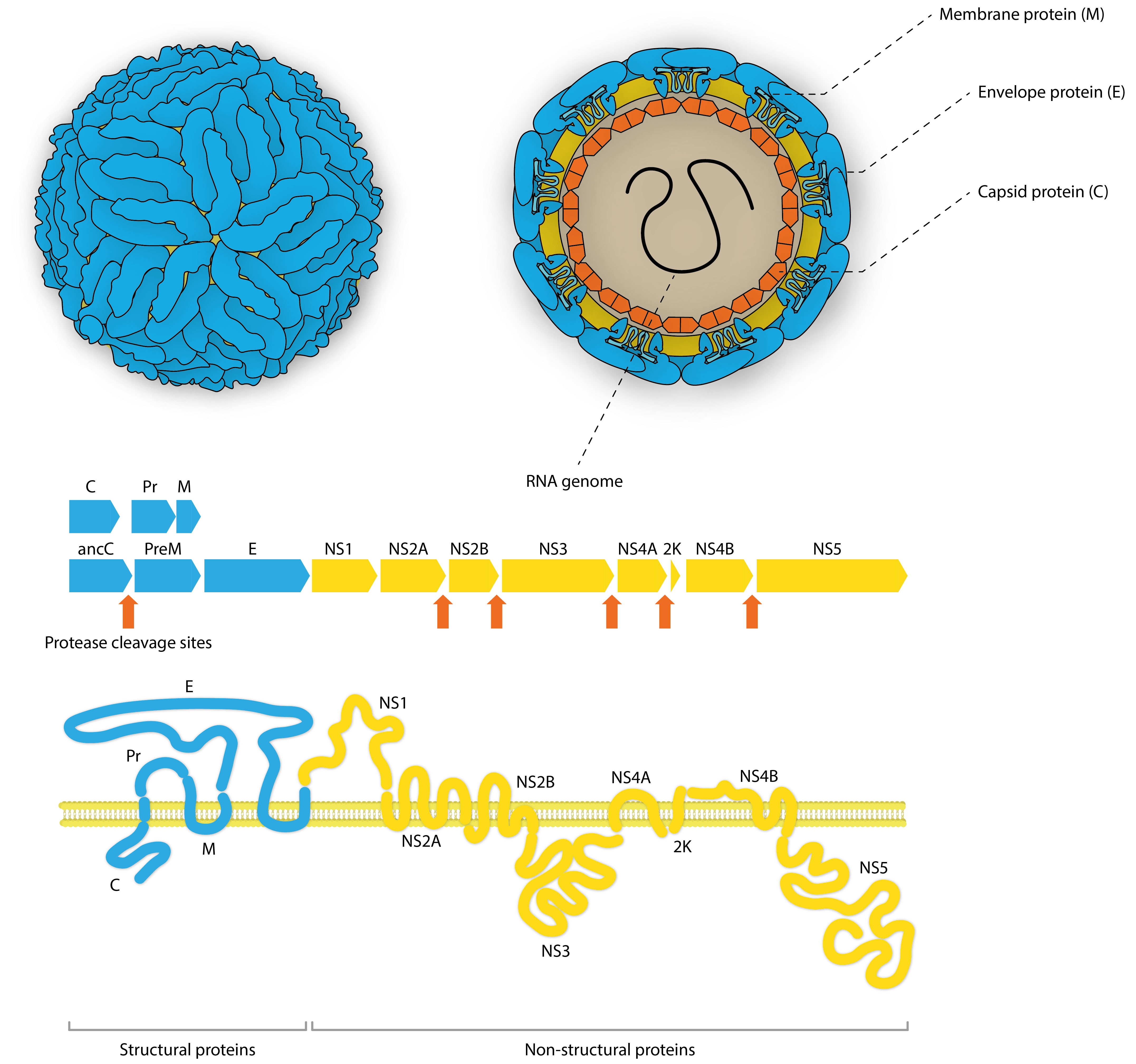 Unlike the structural proteins, non-structural proteins are not part of the final virion and mediate various additional functions for the infecting virus – most commonly hijacking host machinery and stabilising replication complexes.

Non-Structural Protein 1 (NS1) is highly conserved across the Flaviviruses and performs multiple functions. The monomeric form of NS1 has a molecular weight ranging from 46-55kDa, depending on the virus, the protein’s cellular localisation and degree of glycosylation. X-ray crystal structures of NS1 dimers show three functionally distinct domains: A hydrophobic β-roll, an α/β Wing domain and a central β-ladder. NS1 lacks a membrane-spanning domain, but is able to associate with cell membranes by its hydrophobic β-roll and wing ‘spike’ regions [1].

Structures of dimeric and hexameric Zika virus NS1 protein. (A) Structure of dimeric NS1 protein. The NS1 monomer can be divided into three main domains: the b-roll domain, the wing domain, and the b-ladder domain. The ‘spike’ region in the wing domain is coloured orange. (B) The hydrophobic ‘spike’ region is involved in membrane association. (C) Model of the NS1 hexamer. The ‘spike’ region is thought to be involved in the formation of the NS1 hexamer. The hydrophobic hole is indicated by dotted lines. Shi and Gao (2017).

NS1 proteins are trafficked to three destinations, with each variant carrying out distinct functions:

1) Following cleavage in the ER, hydrophilic NS1 monomers rapidly dimerise, increasing hydrophobicity. This causes the majority of intracellular NS1 to associate with dsRNA and other non-structural proteins involved in genome replication, forming vesicle packets (VP). While NS1’s role in the replication complex is not fully understood, it has been suggested that it fufills a structural role in anchoring the replication complex to the VP membrane [2].

2) Some of the dimeric NS1 can be found at the outer surface of the host cell, following cellular trafficking. NS1 dimers bind with the lipid bilayer directly, or through GPI-anchoring. A small portion of secreted NS1 is also thought to bind to cell surface glycosaminoglycans (GAG) [3].

3) The third and final form of NS1 is the most well-known. A small amount of intracellular NS1 is post-translationally modified to produce a glycosylated, soluble, barrel-shaped hexamer that is secreted from infected cells (sNS1). This is achieved by tight association with various lipids which assist in hexamer formation. Once released into the extracellular space and bloodstream, sNS1 plays an important role in both extracellular immune-invasion and evasion. The surface of sNS1 has a versatile electrostatic makeup that make it inherently ‘sticky’, so that it is able to bind a range of difference cells, and mediate a wide range of functionality [4]. 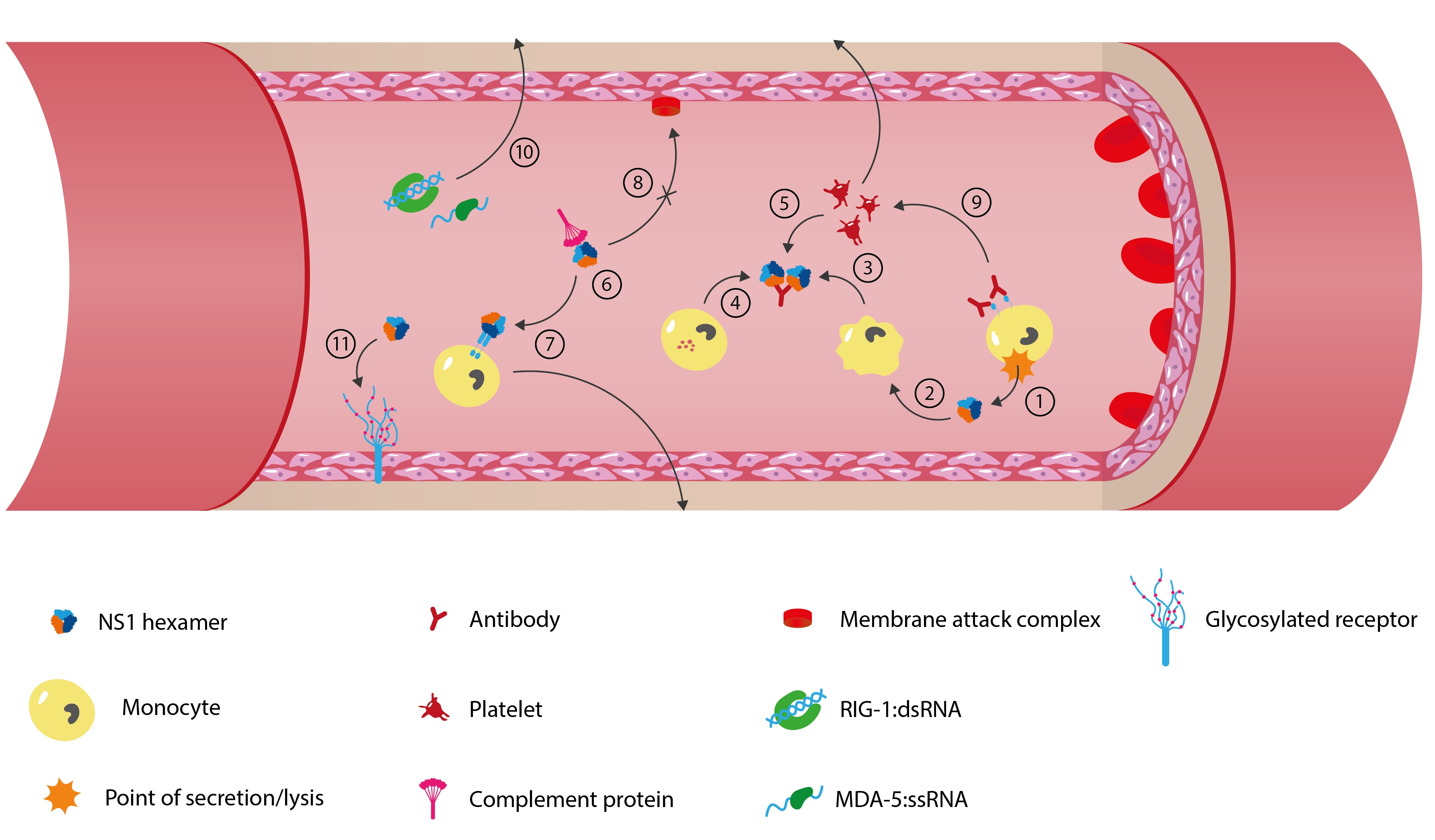 The importance of glycosylation

Glycosylation of flavivirus NS1s is extensive and highly variable, depending on the flavivirus, the host cells they are infecting, and their cellular localisation. Glycosylation is vital in the protein’s maturation process and is required for efficient secretion, virulence and replication of the infecting flavivirus. The importance of NS1 glycosylation is evidenced by the use use of Celgosivir (an α-glucosidase inhibitor) in treating cells that harbour Dengue virus, which prevents proper protein glycosylation, leading to NS1 misfolding and impaired replicative efficiency [5].

For the expression of recombinant NS1 proteins, choosing the right expression system is important. A long-held belief was that insect cells lack the necessary glycosidases and glycosyltransferases to produce NS1 in its complex glycoprotein form [6]. However, more recent studies have shown that both insect and mammalian cell systems can be used to produce NS1 proteins that closely match native viral antigens [7]. At The Native Antigen Company, we use a human embryonic kidney (HEK293) cell line, optimised for the expression and folding of recombinant glycoproteins like NS1.

For most flaviviruses, there are no vaccines or specific treatments available, meaning that control relies heavily on prevention. This is for the most part, achieved by building robust surveillance networks that can identify developing outbreaks before they are able to spread. Thus, with high proportions of asymptomatic, or shared symptoms between flavivirus infections, effective surveillance is heavily reliant on accurate diagnostics.

The most common means of flavivirus diagnosis are serological methods for the detection of NS1 or anti-NS1 antibodies. Both the secreted and cell-surface forms of NS1 are natural immunogens and have been shown to circulate during primary and secondary infections, eliciting an IgG host immune response. Higher concentrations of NS1 also directly correlate with severity of viral disease, making the protein an important biomarker for early diagnosis of infection. NS1-based ELISAs have been extensively developed as diagnostic tools, but have often showed insufficient specificity due to cross-reacting antibodies. In-fact, anti-NS1 antibodies have been shown to cross-react with not only other flavivirus NS1s, but also a range of host proteins, potentially playing a role in disrupting normal bodily functions and facilitating pathogenesis.

In next week’s blog we discuss our broad range of flavivirus NS1 proteins and complementary antibody panels, for use in diagnostic and vaccine research.