Diphtheria toxin: The nuts and bolts 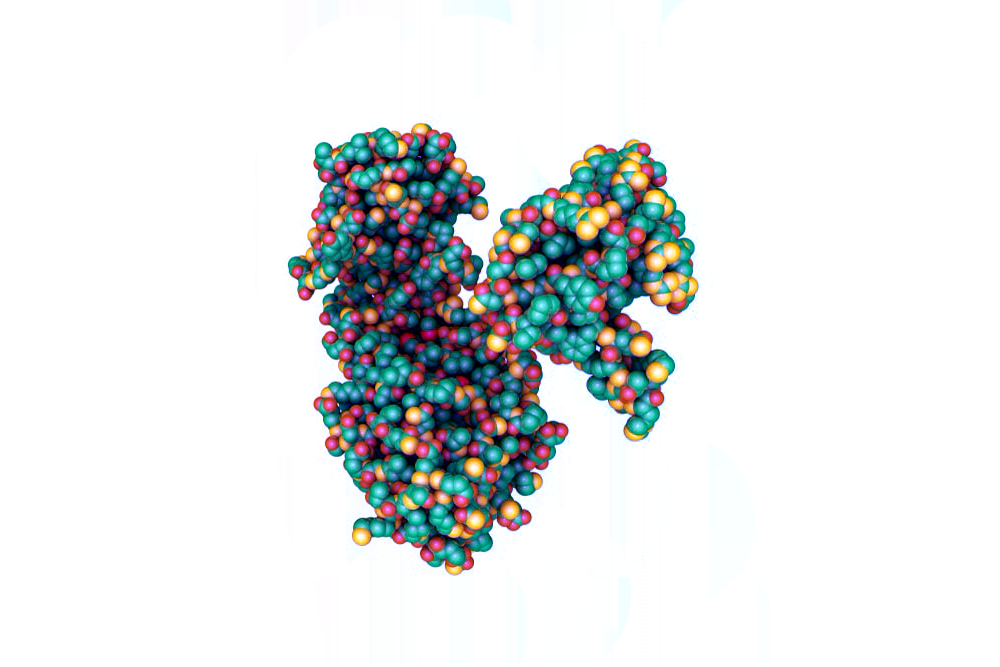 What is Diphtheria toxin?

Diphtheria toxin (DT) is an exotoxin produced by pathogenic strains of Corynebacterium diphtheriae bacteria, whose infection causes a sore throat and fever, followed by necrosis of respiratory tissue that produces a characteristic thick grey coat. As C. diphtheriae was one of the first bacterial pathogens to be isolated and grown on pure culture, DT is one of the most extensively studied and well-understood bacterial toxins[1]. The gene for DT (tox) comes from a lysogenic prophage that integrates its genome with C. diphtheriae plasmids[2]. The gene is translated and secreted as a single, 535-residue polypeptide chain and consists of two major subunits, known as A and B. The N-terminal (A) subunit (1-193AA) carries the catalytic domain, whereas the C-terminal (B) subunit (194-535AA) comprises the receptor binding and transmembrane domains[3]. 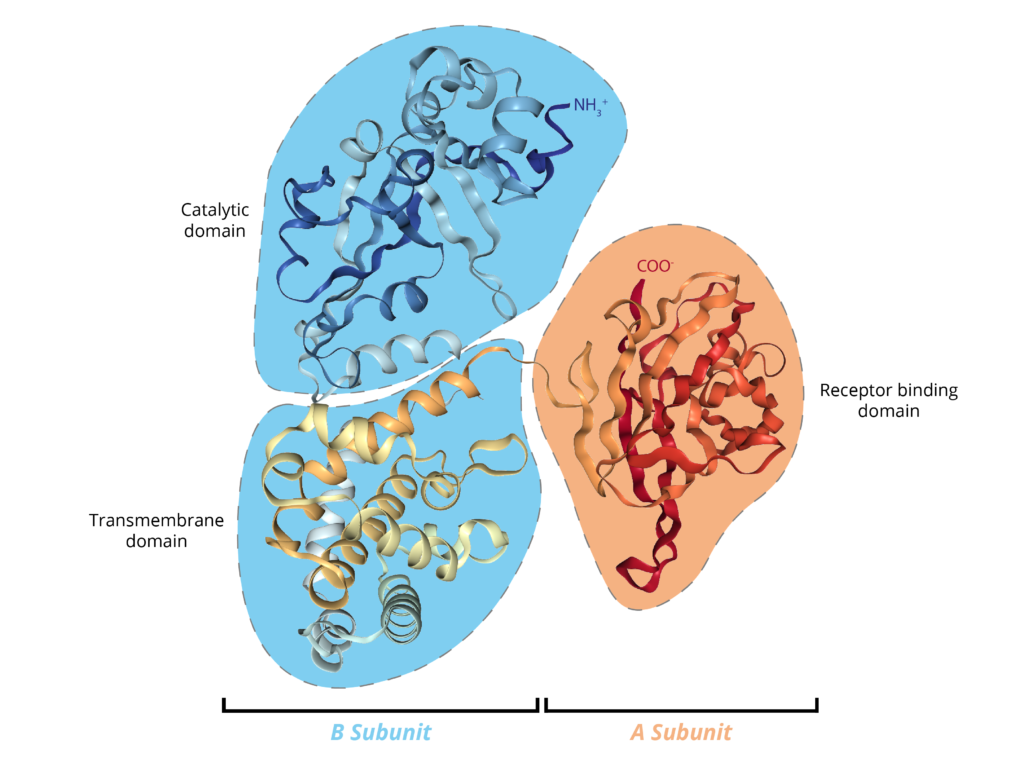 Diphtheria toxin comprises three domains, each with distinct functional activity. The N-terminal (A) subunit comprises the catalytic portion of DT; the C-terminal (B) subunit facilitates receptor binding and internalisation.

How does it work?

DT is a member of the family of A-B, ADP-ribosylating bacterial toxins (bAREs), which function by transferring an ADP-Ribose moiety from cellular NAD+ to intracellular host proteins, resulting in protein inactivation and subsequent cellular dysfunction. Diphtheria toxin functions by selectively ADP-ribosylating ribosomal elongation factor, EF-2,  attenuating protein synthesis and leading to cell death within a matter of hours. DT is a highly potent toxin. A single molecule is capable of killing a human cell and only ~0.1μg of toxin per kilogram of body weight is needed to meet the lethal dose in humans[4]. Considering C. diphtheriae cells can produce 5,000 molecules of exotoxin/hour, it is no surprise that a sustained infection can cause widespread damage to organs and the nervous system[5]. 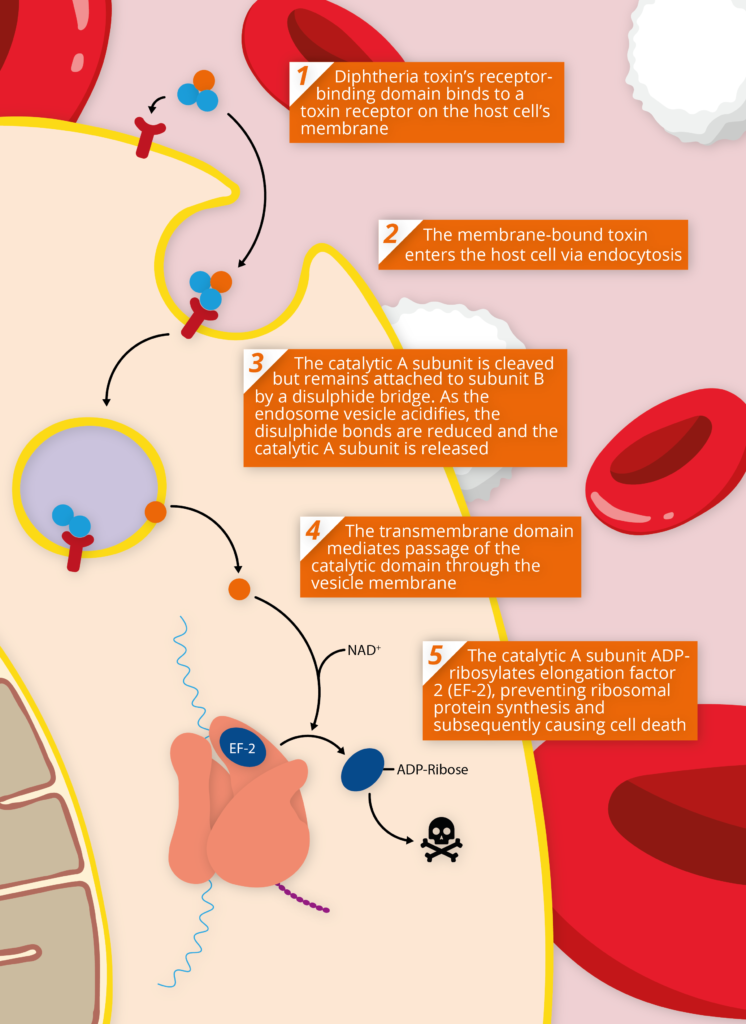 Over the past five decades, a lot of effort has been invested in studying DT’s mechanism of action and the way it contributes to pathogenicity. Structural and functional studies have revealed a modular structure with exchangeable domains that make DT particularly amenable to protein engineering. One of DT’s unique properties is its ability to transport proteins across mammalian cell membranes, which are otherwise impermeable to large molecules. By truncating and fusing DT’s membrane translocation domain with other genes, it can therefore be used as a transporter of protein payloads. Combined with DT’s ability to inactivate ribosomal machinery, this has led researchers to explore its potential in basic research and pharmaceutical applications[6].

Unlike humans, rodent cells do not have the correct form of receptor to bind DT and are therefore resistant to its toxic effects. Using this innate resistance, scientists have generated transgenic mouse models that specifically express DT receptors in restricted cell populations, making them sensitive to extracellular DT and causing selective cell death. With this, DT can be used to generate transgenic mouse models for the study of gene function in vivo.

One such application of this model is the study of the Foxp3 gene in regulatory T-cells. Regulatory T-cells (T-regs) maintain self-tolerance and express the Forkhead box transcription factor, Foxp3, which is essential for their development and function. Therefore, selective depletion of FoxP3+ T-regs provides insight into their role in relation to autoimmune diseases, transplantation, cancers and infectious disease. To deplete FoxP3+ T-reg cells, investigators generated transgenic mice, named ‘depletion of regulatory T-cell’ (DEREG), which expressed a DT receptor-enhanced green fluorescent protein (eGFP) under the control of the Foxp3 locus. FoxP3+ T-reg cells in newborn mice could then be ablated by injection of DT. The DEREG mouse model has enabled scientists to clearly identify and study the effects of FoxP3+ T-reg cells in vivo, unlike with traditional antibody-based methods[7].

Owing to DT’s extreme potency as a toxin, it can be genetically engineered to selectively kill aberrant cells as an immunotherapy. Unlike radiotherapy and surgery, immunotherapies are viable treatments for non-solid metastases and do not damage cellular DNA. To this end, DT has been developed as a prospective anti-cancer agent for otherwise untreatable tumours and has been successfully approved for various indications. A common target for DT therapies has been cells that over-express interleukin receptors, as interleukins are key mediators in many types of cancer, promoting tumour growth and facilitating immune evasion.

DAB389IL2 comprises the first 388 amino acids of DT, genetically fused to interleukin-2 (IL-2), which binds to the high affinity receptor found in many different leukemias and lymphomas[8]. Phase I testing conducted on patients with T-cell lymphoma and other non-Hodgkin’s lymphomas produced five complete and eight partial remissions in patients with T-cell lymphoma. In the pivotal phase III trial, 30% of 71 patients with T-cell lymphoma treated with the drug showed a positive response (20% partial; 10% complete)[9]. Since FDA approval, of the drug (ONTAK) as the first immunotoxin for treatment of advanced T-cell lymphoma in 1999, it has been tested for the treatment of other diseases, including B-cell NHL, B-cell chronic lymphocytic leukemia (CCL), panniculitic lymphoma, psoriasis and Graft-versus-host disease (GVHD), with responses observed in all of these trials[10].

Similar to DAB389IL2, DT388IL3 is comprised of a genetic fusion between a truncated form of DT (amino acids 1-388, comprising catalytic and transmembrane domains), in which DT’s receptor binding domain is replaced by the cytokine interleukin-3 (IL-3), developed for the treatment of acute myeloid leukemia[11]. IL-3 makes a suitable receptor-binding domain as its receptor is not found on other leukocytes, such as macrophages or hepatic cells. IL-3 is also not found in high quantities on non-cancerous stem cells, but is highly expressed on leukemic stem cells, allowing the selective recognition and induction of necrosis[12]. Early safety evaluations of DT388IL3 have showed good tolerance in primates, compared with other AML-targeted therapies[13].

The Native Antigen Company manufactures native Diphtheria toxin from Corynebacterium diphtheriae culture, strain NCTC 10648. We first culture C. diphtheriae in optimal growth medium and then harvest, concentrate, and purify the toxin through several rounds of chromatography. This process results in a Diphtheria toxin that is >98% pure by SDS-PAGE, and is of high quality, with minimal lot-to-lot variation. Our Diphtheria toxin is therefore suitable for use in a range of applications, including IVD assays, cellular research and in vivo work. We offer toxin in both 100μg and 1mg vial sizes, and in a lyophilised format for easy transportation and storage. Each batch is also activity tested in a DEREG mouse model to ensure functionality.

We are offering a 30% discount on our diphtheria toxin for the remainder of 2019. Just use the code DIPT2019 when making your next purchase. For more information on our Diphtheria toxin, click on the button below:

We’re releasing new products every week. You can keep up-to-date by subscribing to our newsletter below: