From Outbreak to Epidemic: A Short History of The Ebola Virus

In the first of a two-part series, we discuss the history of the Ebola virus up to the ongoing outbreak in the Democratic Republic of Congo, and why this disease has been so challenging to fight.

In the summer of 2014, the world watched as the largest Ebola outbreak documented unfolded across West Africa. Starting in a village in southern Guinea, the virus rapidly spread to the neighbouring countries of Liberia and Sierra Leone, before making a leap to Lagos, Nigeria by plane (population 21 million). On August 8th, as cases began to surge, the World Health Organization (WHO) declared the outbreak to be a Public Health Emergency of International Concern (PHEIC), galvanising worldwide attention and encouraging countries to provide aid to the affected regions [1].

Liberia was hit the hardest. With only 50 doctors responsible for the health of 4.3 million people (that’s 1 doctor for every 86,000 people), the virus was spreading “virtually unchecked” [2, 3]. Sierra Leone’s response was more heavy-handed: sending soldiers to ensure that cases were isolated to their respective treatment centres, but in doing so, discouraged people from seeking treatment [4]. In Guinea, amid rumours that health workers had been deliberately spreading the virus, riots broke out and a mob attacked local healthcare workers [5].

In September, the UN secretary general, Ban Ki-moon issued an international rescue call for a “massive surge in assistance”, as the disease was spreading “far faster than the response” [6]. By this point, Médecins Sans Frontières (MSF) had already deployed a substantial amount of healthcare workers in the regions affected, and were taking the full brunt of the outbreak: setting up treatment centres over the affected regions to diagnose and treat patients, while working with local communities to uphold best hygiene practices and prevent transmission. 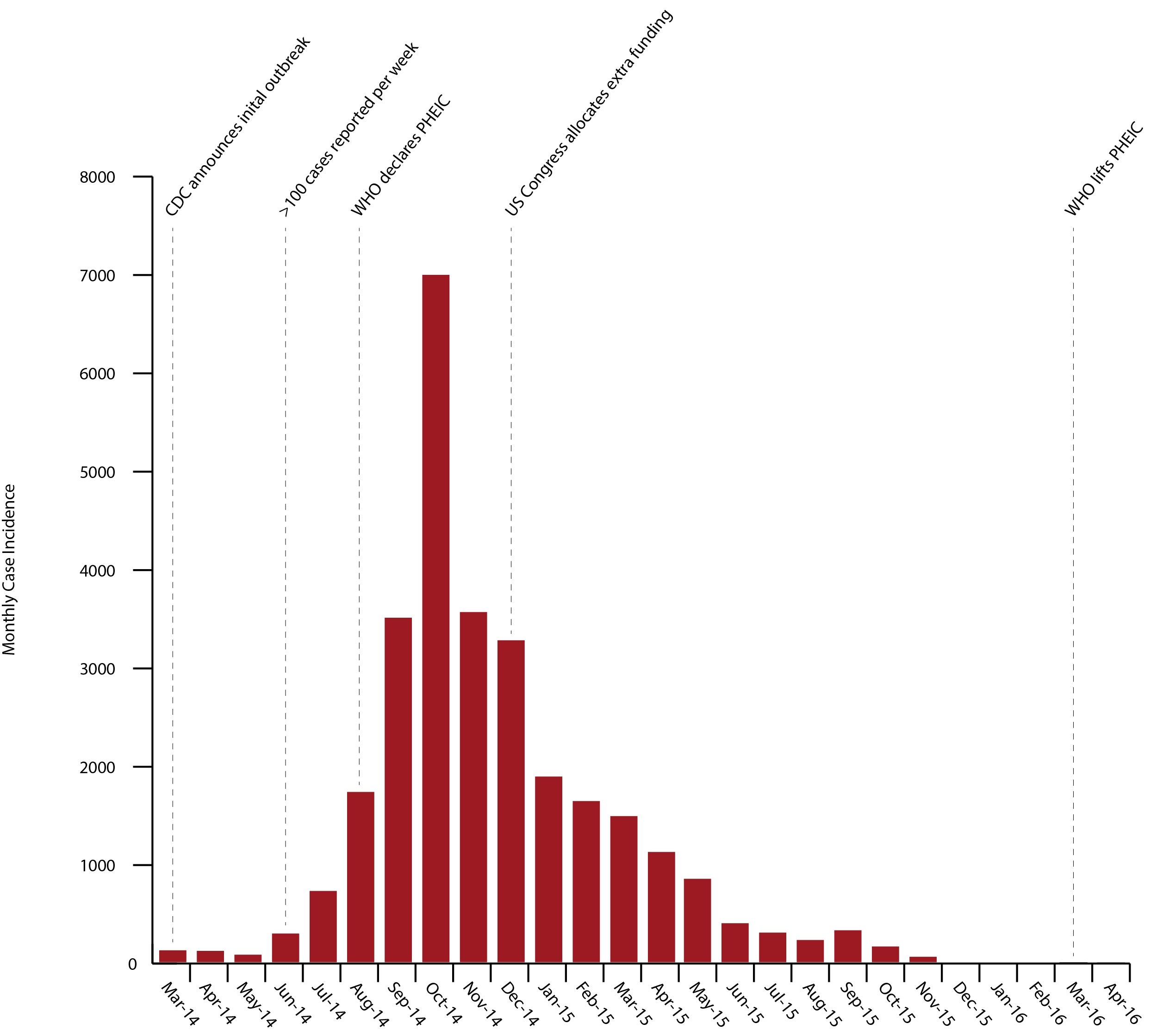 By late 2014, the epidemic had begun to turn a corner and cases were declining. Thanks to MSF and support from the larger global community, transmission had dropped to less than 100 new cases per week by January 2015. By the end of the outbreak, 28,616 cases and 11,325 deaths had been reported (not counting the damage to local healthcare systems) [7]. 10% of the mortalities were healthcare workers, which further incapacitated healthcare provision and deterred international assistance [8]. Governments and organisations worldwide were left reeling from the crisis and are still disputing how the response could have been better handled to prepare for future outbreaks.

In 1976, two almost simultaneous outbreaks occured in Zaire (from which the Ebola river gives its name), DRC and Nzara, South Sudan. Healthcare workers reported a strange new febrile illness, characterised by bloody vomiting, nosebleeds and diarrhoea. Originally thought to be malaria, symptoms of those infected only worsened after treatment and the disease continued to spread between patients and healthcare workers, alike. Samples were swiftly sent to a CDC lab in Atlanta, where researchers identified the agents as a Marburg-like viruses of the Filoviridae family.

First electron micrographs of Ebola virus, taken on 13 October 1976 at the Centers for Disease Control and Prevention [9].

After some deaths in Yambuku, the DRC’s Minister of Health declared the region a quarantine zone under martial law. The Yambuku Mission had no laboratory facilities or doctors on site, and urgent requests for aid were sent out, however, the hospital closed shortly after as most of its healthcare workers had already died from infection [10]. Fortunately, control measures were strengthened by the guidance of the International Commission, bolstered by recent experience in the eradication of smallpox and surveillance of monkeypox. The outbreak was effectively contained. However, of the 318 people affected in Yambuku, 280 died, making for an unprecedented mortality rate of 88%; Sudan reported 284 cases, of which 151 were fatal – a 53% mortality rate.

As quickly as the Ebola virus (EBOV) appeared, it vanished again, and has since re-emerged in short, sporadic outbreaks throughout sub-Saharan Africa since [11].

Where exactly did Ebola come from?

Over the last century, the world has experienced some major global health threats, including Ebola, HIV, Zika, MERS/SARS and Influenza. One of the reasons for the emergence of these new diseases is increased human-animal connectivity. Many zoonotic pathogens have existed in wild animals for years without causing disease, while co-evolving in their natural hosts – slowly reaching a point where they steadily, but unobtrusively, pass through a population. However, growing human populations and their activities have shaken this precarious balance. Disrupted ecosystems, deforestation, hunting and pollution (to name a few), have increased the opportunities for zoonotic pathogens to jump from their natural hosts to humans. Ecological disturbances in particular, can cause nasty things to emerge, and human development is increasingly encroaching on wild areas where humans and animals have not made contact before. The more opportunity these pathogens have to jump across species, the more opportunity they have to mutate and adapt to their new hosts. Take this, along with the highly globalised and interconnected world we now live in, and you have a perfect storm for emerging diseases like the Ebola virus.

EBOV’s emergence over recent decades has led to efforts to better characterise its ecology and zoonotic reservoir, including the trapping and serological testing of thousands of different forest-dwelling animals. Yet, the animal reservoir and intermediary species have been particularly challenging to find. Fruit bats are thought to be the main reservoir but the full picture is still poorly understood [12, 13]; Aedes mosquitos, chimpanzees, gorillas and duikers (small antelope) have also been shown to be infected and are able to transmit the virus [14].

Like other zoonotic viruses, the ebolaviruses probably adapted to living in unison with animal hosts, replicating at a steady rate without causing much harm. However, the chance encounters that have caused spillovers to humans (notably, bush meat and contact with bats) have introduced Ebola to a new environment and new set of biological circumstances that have caused it to adapt and thrive.

After hundreds of field studies, we still aren’t entirely sure where and how the virus hides, and this is one of the reasons EBOV is so difficult to control. Even after successful containment, the virus is able to retreat to its animal reservoir, before sporadically resurging again across a huge geographical area.

Since August 2018, a new Zaire EBOV outbreak has been bubbling on the eastern border of the DRC, and has since spread through much of the north-eastern regions, with over 2,500 cases and 1,700 mortalities reported to date [15]. Last week, the WHO declared the outbreak a Public Health Emergency of International Concern after the virus reached the populous city of Goma, where it has the potential to spread globally [16].

The ongoing outbreak is a very different challenge from 2014’s. Not only is this outbreak a public health threat, but it is taking place in a region rocked by systemic violence and malnutrition that has severely weakened local infrastructure. With over 100 armed groups operating in the area and many healthcare workers victim to threats and attacks, providing support has been challenging for international aid groups. Militant groups in the neighbouring Ituri province in particular have caused an exodus of refugees, who are now being forced through the outbreak zone as part of a much larger humanitarian crisis [17].

Like the 2014/15 outbreak, lack of trust in authorities and local feuds have also exacerbated the problem. Last week, two Ebola workers were killed in their homes, apparently by neighbours who were jealous that they had found employment in the Ebola response [18]. There has also been widespread denial of EBOV’s existence, highlighted by a 2018 study in Beni and Butembo in which 25% of respondents believed Ebola was a hoax [19].

Combined, these factors have made the ongoing Ebola outbreak one of the most complex health crises in history. The geographic spread of the outbreak has been so far unpredictable, with scattered clusters occurring all over the region. This pattern, along with a lack of visibility of the epidemiological situation, will no doubt make ending the outbreak difficult. Yet, while the Ebola virus has historically been an African affliction, it has caught the attention of larger international groups in recent years. This is in part thanks to philanthropic efforts, but also the threat that Ebola poses to the wider global community. Organisations such as WHO, MSF, CEPI, CDC, Western governments and a variety of private organisations are now collaborating to find effective solutions [20].

In next week’s blog, we discuss the strategies being used to contain the outbreak, and the important role that diagnostics play in effective surveillance and containment.