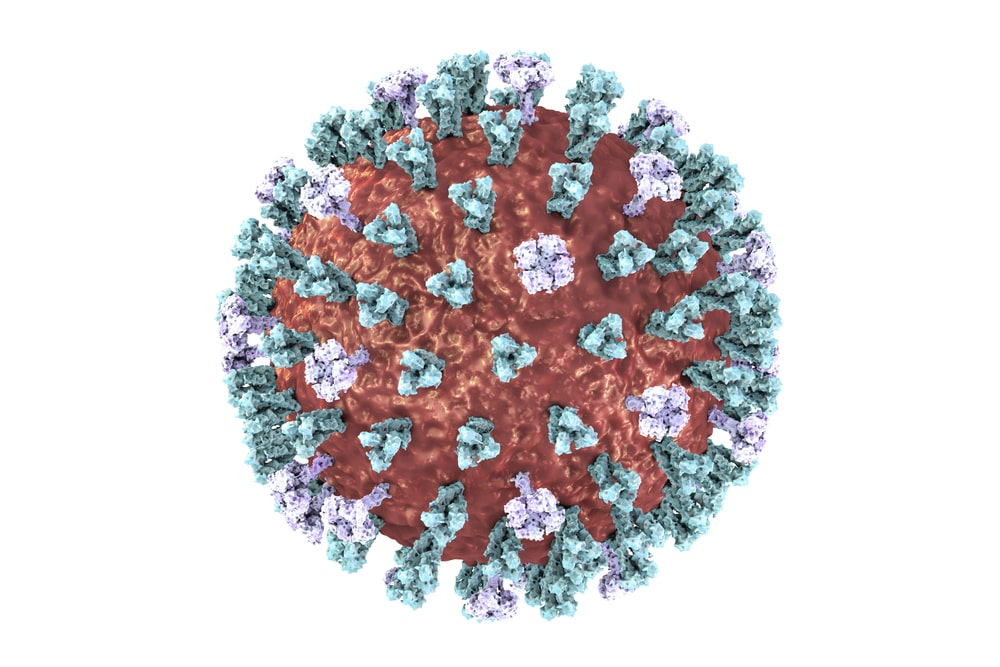 In the midst of widespread concern about growing anti-vaccination sentiments, worldwide, a study published this month suggests that Measles virus infection can also ablate acquired immunity to other diseases. In this blog, we introduce the concept of immune amnesia, discuss the study’s findings, and introduce our new range of Measles, Mumps and Rubella (MMR) antigens, antibodies and immunoassays.

The Current State of Measles

Before vaccines became widely available, nearly all children experienced Measles virus (MV) infection, which is estimated to have resulted in millions of deaths annually [1]. Yet thanks to the advent of safe and effective vaccines, morbidity and mortality from MV infection has decreased significantly in recent decades, and the virus is no longer regarded as a substantial threat to human health in many countries. However, hesitancy to get vaccinated has grown in recent years, causing immunisation rates to stagnate and decline. This has led to an inevitable resurgence in vaccine-preventable diseases across the globe. In Europe, 90,000 measles cases were reported in the first half of 2019, surpassing any other year this century [2]; In the US, 2019 cases have been the highest since 1992 [3]; Cumulatively, the number of global MV cases has surged by nearly 300% since July 2018 [4]. This phenomenon is nothing short of a healthcare catastrophe for the countries affected, with the potential to reverse decades of progress, and the WHO now lists vaccine hesitancy as a top ten global health threat [5].

In addition to the direct risks of MV infection on human health, studies have noted that MV has shown to induce immunosuppressive effects, with a body of literature reaching as far back as 1908 [6]. The implications of MV-induced immunosuppression are significant, and suggest that the virus may have played an even bigger role in human health than first realised. In fact, the combined direct burden and indirect immunosuppressive effects of MV infection may have caused upwards of 50% of all childhood deaths from infectious disease before widespread immunisation [7].

In addition to causing transient suppression of the immune system, long-term effects of MV infection have also been characterised. Termed ‘immune amnesia’, the immune system is thought to ‘forget’ its acquired immunity to other infectious diseases and becomes more susceptible as a result. Conversely, where MV vaccines have been introduced, evidence has suggested ‘non-specific’ benefits to reductions in morbidity and mortality of other infectious diseases [8]. However, there has been no consensus on whether the effects have been real, and what biological mechanisms are implicated. To explain this, there are multiple hypotheses that can be broadly split into direct and indirect effects: Direct vaccine effects are thought to arise from heterologous immune stimulation by the response to vaccination; Indirect effects occur from a vaccine protecting individuals from other pathogens that would negatively affect the immune system [8].

The underlying cause of indirect protection by measles vaccines is hypothesised to be due to a prevention of MV-mediated immune suppression. Suppression of the immune system by MV occurs by infection of memory T cells and B cells, that present a high degree of CD150 cell-surface receptors [9]. Upon causing host immune suppression, MV opens the door to subsequent, secondary infections. However, the long-term effects on the immune system have not been so clearly characterised. 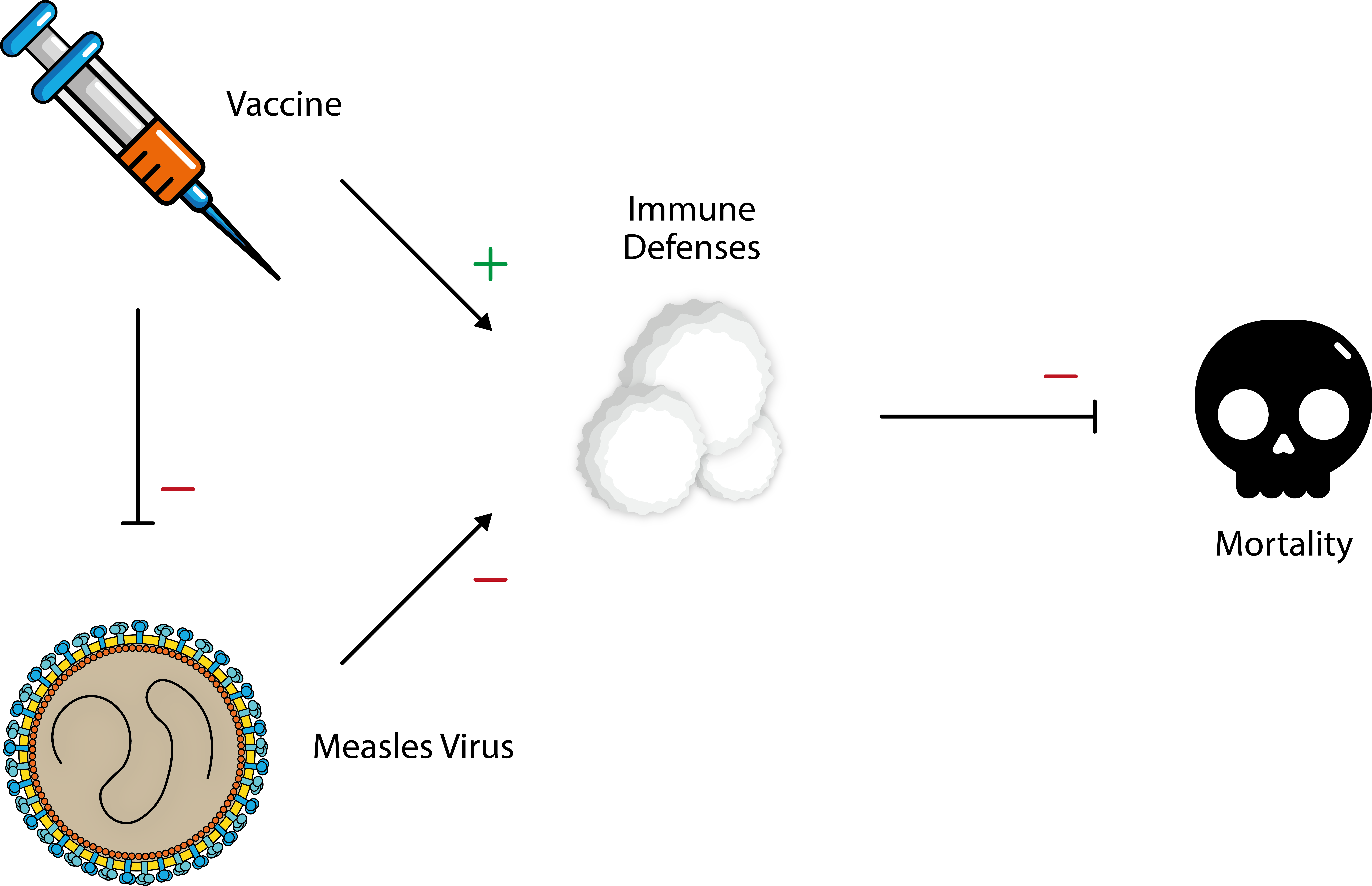 To better characterise the long-term effects of MV on the immune system, a team of American, Dutch and Finnish scientists investigated a recent MV outbreak in the Netherlands, and its effects on the immunological memory of those exposed. Here, we discuss the methodology and findings of their study.

Firstly, blood was taken before and after confirmed MV infection in 77 unvaccinated young children during the MV outbreak. This cohort was compared with four control groups:

i) Age-matched controls sampled at ~3-month intervals, with no MV exposure (Ctrl A)

iv) Young children before and after their first MMR vaccination

To characterise differences and changes in immune memory, the investigators used a phage-display immunoprecipitation and sequencing (PhIP-Seq) technology, known as VirScan. Put simply, VirScan is a DNA microarray technology that uses a phage display technique to detect over 90,000 200-mer oligonucleotides, that cumulatively span the reference protein sequences of all viruses with human tropisms from the UniProt database. The scale of VirScan technology allows very high throughput screening of antibodies, and can therefore be used to characterise immunological memory against many pathogens in population studies.

Reduction in the diversity of antibody repertoires were consistent across the viral and bacterial epitopes, though the extent of this varied, with 12 of the 77 MV-infected children losing over 40% ARD. Effects also varied with severity of infection: Children with mild infection lost a median of 33% ARD, while those with severe infection lost a median of 40% ARD. The upper quintile of children affected lost over 50% of epitope hits for most pathogens and in some of these children, a 70% loss was identified for some pathogens. Conversely, control groups retained ~90% ARD, even over the longer sampling periods of one year. 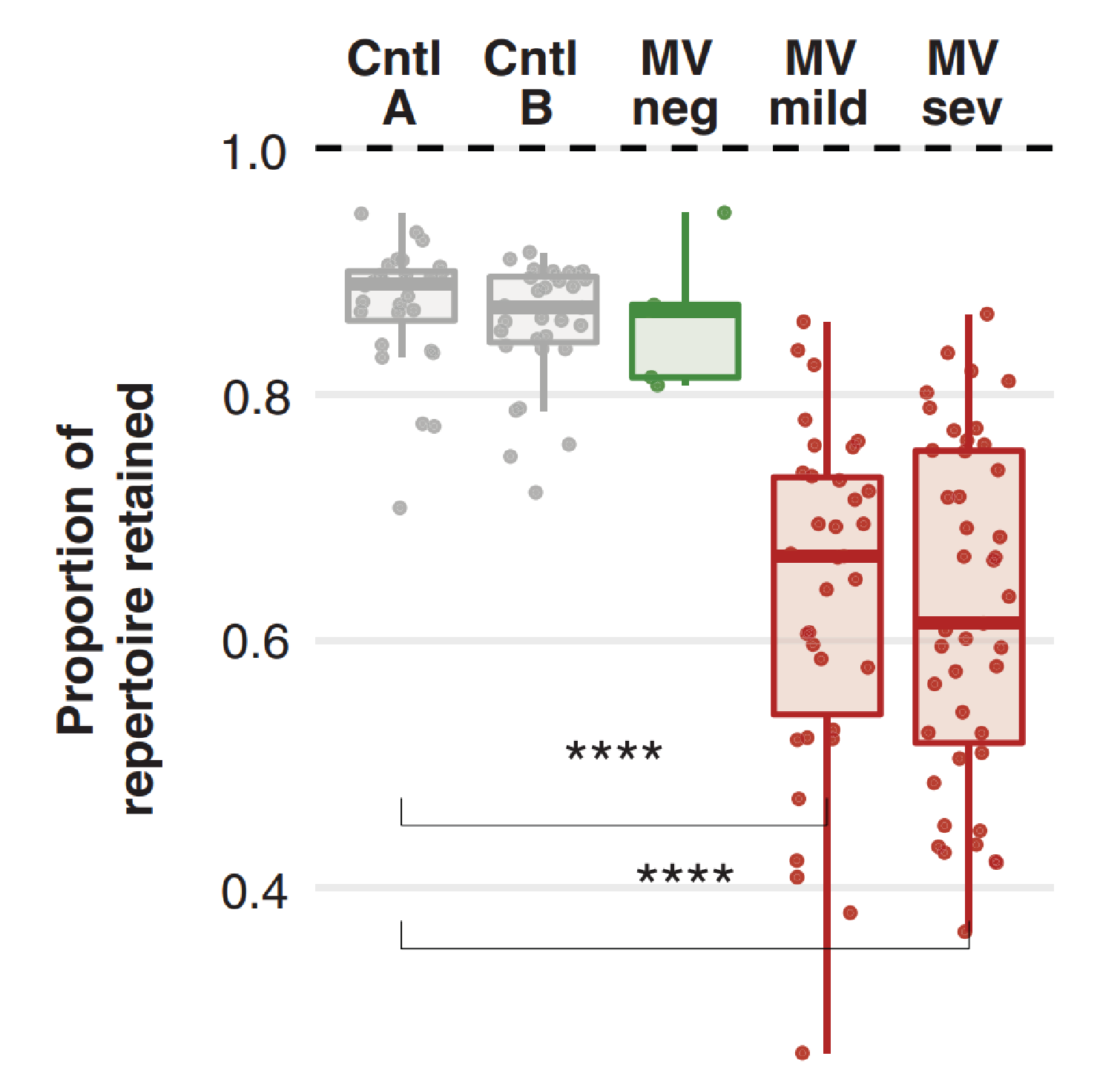 Proportion of total epitopes that were retained from timepoint one, to timepoint two. Each point plotted represents one child. Taken from Mina et al.

Changes in Strength of Epitope Recognition

The investigators also quantified the relative abundance of antibodies using an epitope binding metric (EBSPC), that measured the relative enrichment of epitopes via VirScan. This showed significant differences between the before and after sampling. Following MV infection, children experienced decreases in EBSPC, that suggested ~40% reductions in epitope binding strengths, and was stronger following severe, compared to mild infection.

Epitope binding signal measured for each epitope. Each point represents one pathogen species per sample pair, with binding signal changes recognised per pathogen per sample pair, compared using a Wilcoxon matched-pairs signed rank test. Fdr-adjusted P values (adjusted for a fdr of 5%) are indicated by color of each symbol. The total number of epitopes included in each paired test are indicated by the symbol shape. For each pathogen, the geometric mean (gMean) binding signal was calculated at each time and the fold change at time 2 versus time 1 was calculated and indicated by the position of each point along the y axis. Density distributions adjacent to the points reflect the distribution of points that were significantly changed on the basis of a fdr P value < 0.05. Only pathogens with antibodies targeting ≥5 epitopes are included. Taken from Mina et al.

In summary, the study found that MV infection is associated with large reductions in both the diversity of the body’s antibody repertoire and the magnitude of epitope binding. Considering the variation in immune modulation observed, the authors suggest that the severity of MV infection is a strong influencing factor in elimination of immune memory. In order to regain losses of immune memory, re-exposure by vaccination or natural infection would likely be required, meaning that it could potentially take years to return the antibody repertoire back to its original state, and would put many at risk.

Considering the lasting damage that MV-mediated immune amnesia may cause, millions of additional deaths may occur as a result of MV infection. Findings such as these underline the need to uphold education and public confidence in vaccines, and remind us of the crucial role that vaccination programmes play worldwide.

To support ongoing research and development, The Native Antigen Company now offers a range of antigens, antibodies and immunoassays for the Measles, Mumps and Rubella viruses. Our antigens include both native and recombinant MMR proteins, and are suitable for use in a broad range of applications. Our MMR antibodies are highly specific, and show minimal cross-reactivity with other virus strains, making them ideal for use in immunoassay development. Our ELISA assays can be used for the detection of antibody responses (IgG and IgM) to MMR pathogens, including an IgG avidity assay to differentiate between acute and past infection.