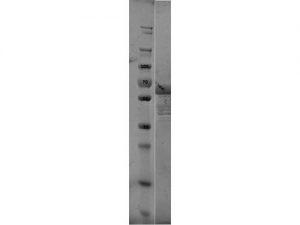 Decorin Binding Protein B (DbpB) is encoded by the spirochete B. burgdorferi, which is carried by Ixodes ticks. Strain B31 is the type strain (ATCC 35210) for this organism and was derived by limited dilutional cloning from the original Lyme-disease tick isolate obtained by A. Barbour (Johnson, et al., 1984). It should be noted that other microbial DbpA’s, such as E. coli (ATP-dependent RNA helicase DbpA), are significantly different to Borrelia DbpA. B. burgdorferi sensu stricto has a linear plasmid (lp54) which carries a two-gene operon encoding two surface lipoproteins, DbpA and DbpB, both of which bind decorin (Guo, et al., 1995).

DbpA and DbpB are surface-exposed outer membrane lipoproteins that mediate the attachment of Borrelia to decorin, a major component of the host extracellular matrix, enabling bacteria to colonize mammalian tissues (Roberts, et al., 1998). Both can mediate interaction with the glycosaminoglycans (GAGs) heparin and dermatan sulfate (Guo, et al., 1998), but only DbpB binds chondroitin sulfate (Fischer, et al., 2003). The expression of decorin-binding protein (Dbp) A and/or DbpB is sufficient to convert a high-passage nonadherent B. burgdorferi strain into one that efficiently binds HEK293 epithelial cells.

The spirochete travels from the tick mid-gut during tick feeding, to the tick salivary glands and into the mammal host, and it is believed that this migration is facilitated by changes in expression of different B. burgdorferi genes. It is thought that expression of the various proteins associated with the spirochete may be regulated by the changes in tick life cycle, changes in conditions during tick feeding (such as temperature, pH, and nutrients) and/or in coordination with the course of infection of the mammal host. While not expressed in the unfed tick, DbpA (and possibly DbpB) are quickly upregulated, either during feeding or after entry, into the host. The location of DbpA and DbpB in the outer membrane of B. burgdorferi allows exposure of these proteins to the host immune system. DbpA has also been used to show high levels of genetic diversity in B. afzelii-infected rodent hosts, by qPCR (Coipan, et al., 2018).

This Borrelia burgdorferi DbpB recombinant protein has been manufactured to aid the development of in vitro diagnostics.