Recombinant VlsE is a fusion protein with an MBP tag and was expressed in E. coli. Purity is greater than 90% by SDS-PAGE.

This is a recombinant Borrelia burgdorferi VlsE protein, fused to an MBP-tag and produced in E. coli (>90% purity).

Many parasites have evolved antigenic variation systems that alter their surface proteins in order to evade recognition by an immune response and subsequent death. Variable Lipoprotein Surface-Exposed protein (VlsE) is a lipoprotein located on the surface of the Lyme Disease spirochete, Borrelia burgdorferi, which is detectable throughout its life stages and is believed to be involved in host immune evasion (Kornacki & Oliver, 1998). Strain B31 is the type strain (ATCC 35210) for this organism and was derived by limited dilutional cloning from the original Lyme-disease tick isolate obtained by A. Barbour (Johnson, et al., 1984).

The Vls antigenic variation locus resides on the linear plasmid, lp28-1 and it is believed that non-vls genes residing on lp28-1 do not play a role in spirochete persistence during infection of the mammalian host (Magunda & Bankhead, 2016). VlsE primary structure consists of N- and C-terminal constant domains that flank a central cassette region. Most of the sequence differences are concentrated in six variable regions (VR), interspersed among six invariant regions (IR).  IRs are either found anchored in the outer membrane of the bacteria, or exposed as antigens on the membrane surface.

During infection, VlsE undergoes antigenic variation through an elaborate gene conversion mechanism to present as many different isoforms in a mammal host. This variation is further exacerbated by an error-prone repair mechanism. In comparison, VlsE is apparently modified to a much lesser extent in tick or rodent vectors. Indeed, several putative envelope proteins of B. burgdorferi appear to be expressed only in the infected mammalian host (Bankhead & Chaconas, 2007).

The VRs are antigenic, irregularly-shaped loops on the bacterial surface, thought to hide both membrane-incorporated and surface portions of adjacent proteins from immune cells. These VR loops are coded by antigenic cassettes (Magnarelli, et al., 2002). A crystal structure of recombinant variant protein VlsE1 (2.3-Å resolution) confirms that the six VRs form loop structures that constitute most of the membrane distal surface of VlsE, covering the predominantly α-helical, invariant regions of the protein (Eicken, et al., 2002).

These protein loops can be switched in or out of the protein, or can be interchanged with different loop types. In B. burgdorferi, there seems to be at least fifteen different VlsE cassettes that can insert into any of the variable regions of VlsE, allowing it to appear as millions of different antigens. Replacement of the VR by Borrelia within days of being exposed to a mammalian host presents new surface antigens to the host immune system and this may reduce the effectiveness of the humoral immune response, facilitating immune evasion and persistent infection (Verhey, et al., 2018).

The surface localization of the variable amino acid segments may protect the conserved regions from interaction with antibodies and contribute to immune evasion. Indeed, B. burgdorferi strains lacking elements of the Vls system are cleared more quickly (several weeks) in infected mice by the adaptive immune response. Variable VlsE was shown to be required for reinfection of immunocompetent mice that had naturally cleared an infection with a VlsE-deficient clone (Rogovskyy & Bankhead, 2013).

Interestingly, the IR region C6 consistently stimulates a strong immune response and may act as a decoy to misdirect the immune system away from less protected sites through competition for binding antibodies. This may help Borrelia to enter T-cells and lead to their destruction (Ohnishi, et al., 2003). Because IR6 is invariable and found in all life stages of B. burgdorferi, it has been used in ELISA diagnostic tests for early IgM of Lyme Disease. 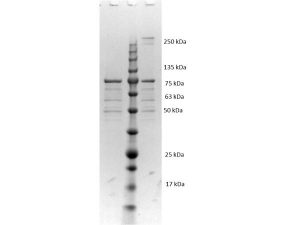