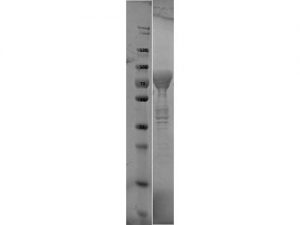 This is a recombinant Borrelia burgdorferi Flagellin protein, fused to an MBP-tag and produced in E. coli (>90% purity).

Flagellin is encoded by the spirochete B. burgdorferi, which is carried by Ixodes ticks. Strain ZS7 was isolated from Ixodes rizinus ticks collected by flagging in the Freiburg, Germany area in the 1980s (Schutzer et al., 2011). The flagella of B. burgdorferi are different from those of other spirochaetes in that they are not surrounded by an outer sheath layer but are comprised of a single flagellin protein. Unlike other bacterial flagella, those of the spirochaetes are situated within the periplasm and are referred to as periplasmic flagella. Studies comparing aflagellate Borrelia to flagellated indicate that the flagella have a role in the invasion of human tissue (Panelius, et al., 2001).

The 41 kD flagellin of B. burgdorferi is a major component of the periplasmic flagellar filament core, found in the hollow cylinder forming the filament. Its structure is helical, which is important for its function (Wallich, et al., 1990). The N- and C-termini of flagellin form the inner core of the flagellar filament, and the central portion of the protein makes up the outer surface. While the terminus of the protein is quite similar between all bacterial flagellins, the central portion is variable.

The flagellin genes are highly conserved among the different Borrelia species (Noppa, et al., 1995). Borrelia have double-stranded linear plasmids in addition to supercoiled circular plasmids, in low copy number. This suggests that initiation of DNA replication and partitioning are carefully controlled during the cell division cycle (Casselli, et al., 2012). Mammals often have acquired immune responses (T-cell and antibody responses) to flagellated bacterium and some bacteria are able to switch between multiple flagellin genes in order to evade this response; B. burgdorferi may also use this tactic when challenging mammals with infection (Noppa, et al., 1995).

It is believed that expression of the various proteins associated with the spirochete may be regulated by the changes in tick life cycle, changes in conditions during tick feeding (such as temperature, pH, and nutrients) and/or in coordination with the course of infection of the mammal host, i.e., changes in environment as the spirochete migrates from the tick’s midgut to its salivary glands to the mammal host. B. burgdorferi can attach to (and also differentially express antigens in) diverse tissues within the vertebrate host and the tick vector, suggesting that physiological factors other than pH and temperature may play roles in modulating B. burgdorferi gene expression. Flagellin is considered a good candidate for serodiagnosis in early stage of Lyme disease (Liu, et al., 2016) and in some instances has been the only detectable protein in serologic assays (Wagemakers, et al., 2018).