This is a recombinant Borrelia miyamotoi GlpQ protein produced in E. coli with 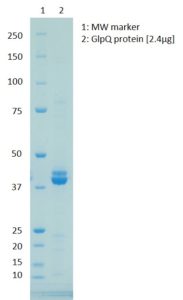 This is a recombinant Borrelia miyamotoi GlpQ protein produced in E. coli with

Relapsing Fever is an arthropod-borne infection caused by bacteria of the genus Borrelia, and sub-species Relapsing Fever. It can be divided into Louse-borne Relapsing Fever and Tick-borne Relapsing Fever. Borrelia miyamotoi is a tick-borne relapsing fever Borrelia group spirochete that is transmitted by the same hard-bodied (Ixodid) tick species that transmit the agents of Lyme disease. It was discovered in 1994 in Ixodes persulcatus ticks in Japan. B. miyamotoi species phylogenetically cluster with the relapsing fever group spirochetes, which usually are transmitted by soft-bodied (argasid) ticks or lice. B. miyamotoi infects at least six Ixodes tick species in North America and Eurasia that transmit Lyme disease group spirochetes and may use small rodents and birds as reservoirs. Human cases of B. miyamotoi infection were first reported in 2011 in Russia and subsequently in the United States, Europe and Japan (Krause et al., 2015). The most common clinical manifestations of B. miyamotoi infection are fever, fatigue, headache, chills, myalgia, arthralgia, and nausea. Symptoms of B. miyamotoi infection generally resolve within a week of the start of antibiotic therapy.  As early as 1985, spirochetes that were likely B. miyamotoi were observed in ticks in the United States. However, they were mistakenly thought to be B. burgdorferi as a consequence of cross-reactive antibodies that were used in direct immunoassays. Additionally, antigenic cross-reactivities in immunoassays between Borrelia species in North America also complicated diagnosis of both Lyme disease and relapsing fever (Magnarelli et al., 1987).