Recombinant CCHFV major glycoprotein Gc produced in HEK293 cells and purified from culture supernatant. The C-terminal transmembrane domain and the intravirion tail of the protein have been replaced by a 15 amino acid glycine-serine linker and the sheep IgG Fc region. 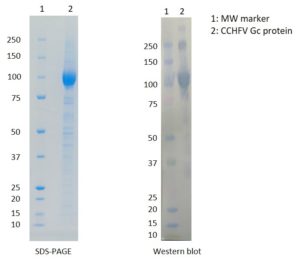 CCHF virus Gc with sheep Fc-tag (Gc, previously referred to as G1), manufactured by The Native Antigen Company to meet the increasing need for high quality reagents for research into diagnosis of CCHF, as well as vaccine development. We also produce a human Fc-tag version of this CCHF virus Gc protein here.

Crimean Congo hemorrhagic fever (CCHF) virus is a tick-borne enveloped single stranded RNA virus that belongs to the genus Nairovirus and a member of the Bunyaviridae family. CCHF virus causes a hemorrhagic disease in humans with up to 80% case fatality. Although the virus has only caused sporadic disease in the past, the expansion of the range of its vector, the Hyalomma tick, is causing increasing concern that case numbers will continue to rise (Dowall et al., 2017).

Since CCHF was first described in Crimea in 1944, sporadic outbreaks have occurred globally. In 2015, CCHFV was identified by the WHO as an emerging virus which is likely to cause a severe epidemic and which may present a public health emergency. Zoonotic transmission from host animals is the primary route of infection, with concerns this may increase in the next 10-20 years as the timing of religious festivals change. The virus may also be spread effectively by human to human contact, especially in hospital settings. There are also concerns that it may be used as a bioterrorism agent, with evidence that work on this was carried out both in the USSR and in Iraq.