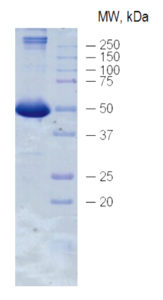 Chikungunya Virus E1 Envelope protein (insect cells) has been developed in response to the need for high purity recombinant Chikungunya antigens. Protein is produced in insect cells and has

Chikungunya fever is a debilitating arthritic disease caused by chikungunya virus (CHIKV). CHIKV was   first identified in 1952–53 during an outbreak in southern Tanzania. It is a small (~70 nm in diameter), enveloped virus that is a member of the Old-World Semliki Forest virus group of arthritogenic alphaviruses within the Togaviridae family. CHIKV infection is commonly characterised by acute fever that progresses to severe, persistent arthralgia in the chronic stage of disease.  The disease is usually self-limiting, but in some patients debilitating joint pain can persist for years. Historically, CHIKV has been endemic in tropical and subtropical regions of sub-Saharan Africa and Southeast Asia, where two distinct CHIKV transmission cycles exist; a rural enzootic transmission cycle, which occurs between various forest or savannah Aedes spp. mosquitoes and animal reservoirs. However, during urban epidemics, CHIKV can also be transmitted to human hosts by Aedes spp. mosquitoes.

Chikungunya virus has ~12 kb positive-sense RNA genome that encodes four non-structural proteins (nsP1–4), with five structural proteins (C, E3, E2, 6K, and E1). The genome is packed into virions that are similar to those of other alphaviruses and embedded within the viral envelope are heterodimers of the E1 and E2 glycoproteins arranged in trimers forming an icosahedral lattice. E1 mediates fusion of the viral envelope and cellular membrane via a fusion peptide (reviewed in Silva and Dermody, 2017). Bacterially produced subunit vaccines based on recombinant E2 and E1 protein antigens, delivered in combination with different adjuvants, have been shown to induce the production of high amounts of neutralising antibodies (reviewed in Burt et al., 2017). Mammalian produced virus-like particles (VLPs) have also shown promise as vaccine candidates.