Recombinant Chikungunya virus mutant (A226V) E1 envelope protein, comprising amino acids 67-482, expressed in insect cells with This point mutation was shown to be responsible for an increased capacity of CHIKV strains to infect and replicate in the mosquito Aedes albopictus, facilitating virus transmission to a naive human population. 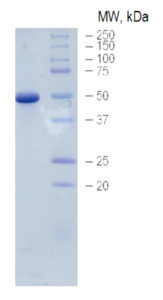 Chikungunya Virus Mutant (A226V) E1 Envelope Protein (Insect Cells) has been developed in response to the need for high purity recombinant Chikungunya antigens. This chikungunya virus mutant E1 protein is produced in insect cells and has

Chikungunya fever is a debilitating arthritic disease caused by chikungunya virus (CHIKV). CHIKV was   first   identified in 1952–53 during an outbreak in southern Tanzania. The virus belongs to the genus alphavirus of the Togaviridae family and, similar to other arthritogenic alphaviruses, its infection is commonly characterised by acute fever that progresses to severe, persistent arthralgia in the chronic stage of disease.  The disease is usually self-limiting, but in some patients debilitating joint pain can persist for years. The virus usually circulates in a sylvatic cycle between non-human primates or mammalian reservoir hosts and Aedes species mosquitoes. However, during urban epidemics, CHIKV can be transmitted to human hosts by Aedes spp. mosquitoes.

Chikungunya virus has ~12 kb positive-sense RNA genome that encodes four non-structural proteins (nsP1–4), with five structural proteins (C, E3, E2, 6K, and E1). The genome is packed into virions that are similar to those of other alphaviruses and the cellular receptors for CHIKV are currently not known. CHIKV is believed to have originated in Africa, with subsequent spread to Asian countries. Genetic analyses of strains have identified three distinct lineages of Chikungunya virus: the west African lineage, the East/Central/South African (ECSA) lineage, and the Asian lineage, derived from the ECSA virus. In 2004 an epidemic strain of the ECSA lineage emerged and spread from coastal towns of Kenya to the Indian Ocean islands, causing a large outbreak. During the later stages of the outbreak the Indian Ocean lineage virus acquired a mutation in its envelope glycoprotein (A226V) which improved its abily to adapt and replicate in A. albopictus (but did not affect its infection ability in A. aegypti) (reviewed in Burt et al., 2017).

Chikungunya virus continues to cause large epidemics worldwide, with no specific treatment or vaccine currently available to prevent infection. This Chikungunya virus mutant E1 recombinant antigen has been manufactured to help develop future vaccines and diagnostic tools against this disease.