Sudan Ebola Virus (SEBOV) Boniface 1976 Envelope Glycoprotein (GP) is a recombinant protein produced in HEK293 cells. SEBOV GP has been developed for use in immunoassay and vaccine development. 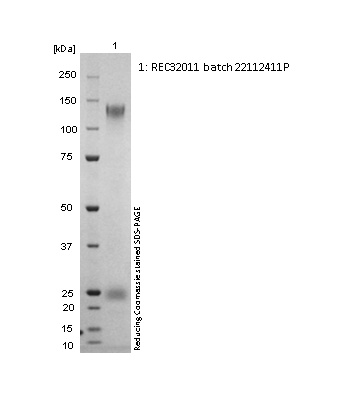 Sudan Ebola Virus (SEBOV) Boniface 1976 Envelope Glycoprotein (GP) is a recombinant protein produced in HEK293 cells. SEBOV GP has been developed for use in immunoassay and vaccine development.

Ebola hemorrhagic fever (EHF) is a severe disease caused by several species of ebolavirus (EBOV), in the family Filoviridae. Prior to 2007, four species of EBOV had been identified, with two (Zaire ebolavirus and Sudan ebolavirus) having caused significant disease outbreaks in humans. The presence of a fifth EBOV virus species, Bundibugyo ebolavirus (BEBOV) was identified after an outbreak of EHF in the Bundibugyo District of western Uganda in 2007. Outbreaks of EHF are associated with person-to-person transmission after the virus is introduced into humans from a zoonotic reservoir. During outbreaks the virus is commonly transmitted through direct contact with infected persons or their bodily fluids. The onset of EHF is associated with nonspecific signs and symptoms, including fever, myalgias, headache, abdominal pain, nausea, vomiting, and diarrhoea. In the later stages of disease, overt haemorrhage has been reported in up to 50% of cases.

The WHO declared an outbreak of Sudan subtype of the ebolavirus family in Uganda on the 20th of September 2022. As of 24th of November 2022 a total of 163 confirmed cases were confirmed, with a mortality rate of ~34% (Source: https://www.who.int/emergencies/disease-outbreak-news/item/2022-DON425). The virus was discovered in 1977 during an outbreak in southern Sudan. Six outbreaks have been ascribed to Sudan ebolavirus, with case numbers ranging from 1 in 2011 to over 400 in 2001, both in Uganda. Symptoms caused by Sudan and Zaire ebolavirus are indistinguishable. There have been vaccine efforts by GSK, Geovax, Merck and the Jenner Institute but so far no licensed vaccine for Sudan ebolavirus is on the market.

The EBOV envelope glycoprotein is initially produced as a precursor known as pre-GP, which is cleaved by furin into two subunits, GP1 and GP2, which remain associated through a disulfide linkage between amino acid 53 in GP1 and 609 in GP2. This heterodimer assembles into a 450-kDa trimer at the surface of nascent virions. The virion-attached GP is critical in the EBOV life cycle, as it is solely responsible for attachment, fusion and entry of target cells. Moreover, GP is responsible for critical pathogenic differences among viral species.

Further information on the structure of EBOV GP and its facilitation of ebolavirus entry into cells is provided by Lee and Saphire (2009).