Recombinant human basigin (BSG, CD147) produced in HEK293 cells and purified from culture supernatant. There is evidence that this protein can serve as an alternative entry receptor for SARS-CoV-2. SARS-CoV-2, previously known as the 2019 Novel Coronavirus (2019-nCoV), causes the pandemic COVID-19 disease. 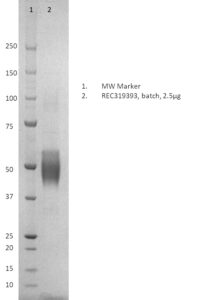 Recombinant human basigin (BSG, CD147) produced in HEK293 cells and purified from culture supernatant. There is evidence that this protein can serve as an alternative entry receptor for SARS-CoV-2.

CD147 (also known as Basigin (BSG) or EMMPRIN) is a highly glycosylated transmembrane protein which belongs to the immunoglobulin superfamily and acts as the main upstream stimulator of matrix metalloproteinases (MMPs) (Kong et al., 2014). It is present in multiple cellular types in lung and highly expressed in type II pneumocytes and macrophages at the edges of the fibrotic zones (Guillot et al., 2006). Expression levels of CD147 and MMPs are often increased in tumor tissue, inflammation and pathogenically infected cells and is associated with cancer progression (Mattos et al., 2002). Patients with severe asthma have high levels of MMP-9 in sputum and influenza A virus infection increases CD147 expression in cells from asthmatics (Moheimani et al., 2018). CD147 also acts as an RBC receptor for Plasmodium falciparum, a Malarial protozoan (Wang et al., 2020).

Cyclophilin A (CyPA) is a ubiquitously distributed cellular protein and is thought to assist protein folding and to function as a chaperone. It can be integrated with virions of some viruses, including HIV-1 and vaccinia virus and plays a role in viral invasion or replication. CD147 is a receptor for CyPA and contributes to viral infection or inflammation. SARS-CoV nucleocapsid (N) protein bound to CyPA has been shown to interact with a member of the CD147 family (Chen et al., 2005). SARS-CoV-2 invades host cells via two receptors, angiotensin-converting enzyme 2 (ACE2) and CD147. The virus Spike protein (S) binds to ACE2 or CD147 on the host cell, mediating viral invasion and dissemination of virus among other cells. CD147 therefore plays a functional role in mediating the viral invasion of the host cell. It therefore provides a key target for the development and administration of specific anti-SARS-CoV-2 receptor blocking drugs and may offer a novel therapeutic strategy against viral invasion (Ulrich & Pillat, 2020).