Human IgG1 anti SARS-CoV-2 nucleoprotein is a recombinant monoclonal antibody that recognizes and binds the non-linear/conformational epitope of the N protein of SARS-CoV and  SARS-CoV-2. SARS-CoV-2, previously known as the 2019 Novel Coronavirus (2019-nCoV), causes the pandemic COVID-19 disease. 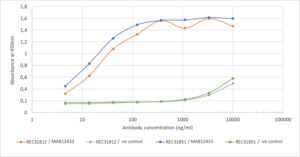 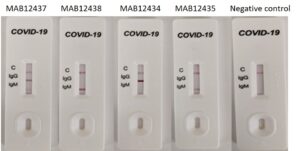 Human anti SARS-CoV-2 Nucleoprotein antibody is a recombinant monoclonal antibody that recognizes the the SARS-CoV and SARS-CoV-2 nucleoprotein, the causative agent of COVID-19. Immunofluorescence staining was used to demonstrate binding of CR3009 to SARS-CoV infected Vero cells (van den Brink et al., 2005) and initial characterization of the antibody for binding to SARS-CoV-2 was carried out by ELISA.

The coronavirus nucleocapsid phosphoprotein (N, or nucleoprotein) is highly basic and binds the viral RNA as a dimeric entity into nucleocapsids which protect the viral genome, while also providing access for replication when required. The nucleoprotein packages the positive strand viral genome RNA into a helical ribonucleocapsid (RNP) and plays a fundamental role during virion assembly through its interactions with the viral genome and membrane protein M. It plays an important role in enhancing the efficiency of subgenomic viral RNA transcription as well as viral replication (Fan et al., 2005).

Antibodies directed against the nucleoprotein are useful tools for the development of diagnostics and the characteristics of both CR3009 and CR3018 could be useful in the development of a diagnostic test (Van Den Brink et al., 2005). A competition ELISA on immobilized SARS-CoV showed that binding of biotinylated IgG CR3009 and CR3018 was not or hardly affected in the presence of excess of unlabeled IgG CR3018 and CR3009, respectively. As expected binding of the biotinylated anti-N MAbs is blocked by their unlabeled counterparts but not by anti-S MAb CR3014. Therefore, IgG CR3009 and CR3018 do not compete with each other for binding to N protein and most likely recognize different epitopes. Pepscan analysis was used to map the epitopes of CR3009 and CR3018 IgG on the N protein. IgG CR3018 reacted with a continuous series of linear and looped peptides, starting with the sequences GPQSNQRSAPRITFG and PQSNQRSAPRITFGG, respectively, and both ending with the peptide RSAPRITFGGPTDST, thereby having the minimal sequence RSAPRITFG in common. This linear epitope is conserved in the N protein sequence of all published human SARS-CoV and animal SARS-CoV-like isolates but is absent in other members of the family of Coronaviridae. For IgG CR3009 the N protein Pepscan analysis did not reveal significant binding to any of the N protein-derived peptides, suggesting that it recognizes a nonlinear epitope.