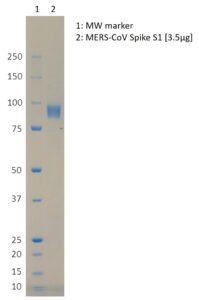 Middle East respiratory syndrome-related coronavirus (MERS-CoV) is a positive-sense, single-stranded RNA virus of the genus Betacoronavirus (group C lineage). The genome encodes at least 10 open reading frames (ORFs), nine of which are expressed from seven subgenomic mRNAs (sg mRNAs), which are then translated into four major viral structural proteins, including spike (S), envelope (E), membrane (M), and nucleocapsid (N), as well as several accessory proteins, such as 3, 4a, 4b, 5, and 8b with unknown origins and functions (Du et al., 2016).

The spike (S) glycoprotein is responsible for receptor binding and subsequent viral entry into host cells, and it is, therefore, a major therapeutic target and primary target for neutralizing antibodies. It contains protrusions that will only bind to certain receptors on the host cell which are essential for both host specificity and viral infectivity. It is also a major immunogen and a target for entry inhibitors. MERS-CoV S is composed of an N-terminal S1 subunit, which is folded as four domains (A–D) and mediates attachment to dipeptidyl-peptidase 4 (DPP4, the host receptor), and a C-terminal S2 subunit that merges the viral and cellular membranes to initiate infection. MERS-CoV S is cleaved at the junction between the S1 and S2 subunits either during viral biogenesis or upon encounter of target cells. A second cleavage site, designated S2′, is found upstream of the fusion peptide in the S2 subunit and is processed at the onset of membrane fusion (Park et al, 2019). Both cleavage sites participate in enhancing viral entry and modulating host range and cell tropism (Du et al., 2016). The S1 subunit has been the focus of most immunization strategies against MERS-CoV, as it contains the receptor-binding domain (RBD) that mediates virus attachment to its host receptor (Wang et al., 2015). Specific targets in the S protein include N-terminal domain (NTD), RBD and other regions in S1 subunit, and HR1 and HR2 in S2 subunit, as well as other targets related to the function of MERS-CoV S protein (Du et al., 2016).

MERS-CoV is one of several viruses identified by WHO as a likely cause of a future epidemic and is listed for urgent research and development. The high case fatality rate, vaguely defined epidemiology, and absence of prophylactic or therapeutic measures against this novel virus have created an urgent need for an effective vaccine should an outbreak expand to pandemic proportions. Immunogens based on full-length Spike DNA and S1 subunit protein have been shown to elicit robust serum-neutralizing activity against several MERS-CoV strains in mice and non-human primates (Wang et al., 2015). In indirect ELISAs, MERS-CoV spike (S) ectodomain (amino acids 1-1297) and S1 subunit (amino acids 1-725) showed higher sensitivity and specificity (≥90%) than nucleocapsid protein (N), and showed better agreement and correlation with microneutralization assays. The Spike protein therefore represents a good choice for seroepidemiological testing and surveillance in MERS-CoV endemic regions.