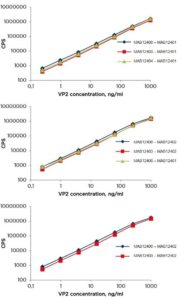 Canine parvovirus (CPV) belongs to the genus Protoparvovirus and the family Parvoviridae and causes a highly contagious and fatal disease in dogs (Kelly, 1978). The symptoms include lethargy, loss of appetite, fever, vomiting, and severe (often bloody) diarrhea. Parvoviral infection must be considered as a possible diagnosis in any young dog with vomiting and/or diarrhea. Puppies and dogs usually become infected when they ingest a virus that has been passed in the feces of an infected dog. Vomiting and diarrhea can cause rapid dehydration, and most deaths from parvovirus occur within 48 to 72 hours following onset of clinical signs.

The disease can be prevented by vaccination and CPV‑2 vaccine is recommended as a core vaccine that should be given to all dogs. However, there are concerns regarding the complete efficacy of existing vaccines against antigenic variants which may evolve to escape the immune system via antigenic drift, resulting in vaccine failure. (Zhou et al., 2017).