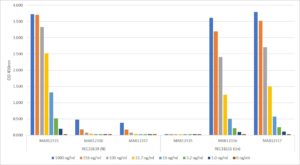 Crimean Congo hemorrhagic fever (CCHF) virus is a tick-borne enveloped single stranded RNA virus that belongs to the genus Nairovirus and a member of the Bunyaviridae family. CCHF virus causes a hemorrhagic disease in humans with up to 80% case fatality. Although the virus has only caused sporadic disease in the past, the expansion of the range of its vector, the Hyalomma tick, is causing increasing concern that case numbers will continue to rise. Since CCHF was first described in Crimea in 1944, sporadic outbreaks have occurred globally. In 2015, CCHFV was identified by the WHO as an emerging virus which is likely to cause a severe epidemic and which may present a public health emergency. Research into diagnosis of the illness, and also into vaccine development is increasing.

The CCHF virus Gn protein is a potential target for vaccine development, although efficacy has not yet been demonstrated. The CCHFV genome is circular, ambisense RNA in three parts; Small (S), Middle (M) and Large (L). The L segment encodes the RNA polymerase; the M segment encodes the envelope proteins (Gc and Gn); and the S segment encodes the nucleocapsid protein (NP). The envelope protein is initially translated as a glycoprotein precursor which is then cleaved into two smaller proteins.  The CCHFV genome M segment encodes a large polyprotein (1,684 amino acids in length) containing the two major structural glycoproteins, Gn and Gc, that are post-translationally processed from precursors PreGn and PreGc by SKI-1 and SKI-1-like proteases, respectively.