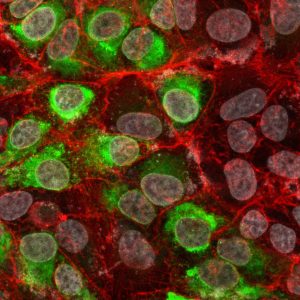 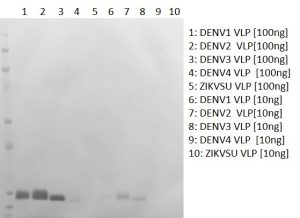 Western Blotting of Dengue Virus-Like Particles with MAB12136. The antibody binds strongly to DENV serotypes 1-3 in WB, and weakly to DENV4. No reactivity is seen to Zika VLP. 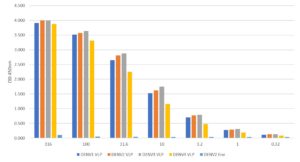 Dengue virus (DENV) is a single-stranded RNA virus that belongs to the genus Flavivirus, which includes the Zika virus, West Nile virus and Japanese Encephalitis virus. Dengue virus infection is transmitted to humans by mosquitoes, primarily the Aedes aegypti species. It is a febrile illness that affects infants, young children and adults with symptoms appearing 3-14 days after an infective bite. Symptoms range from a mild, to incapacitating high fever, with severe headache, pain behind the eyes, muscle and joint pain, and rash. Severe dengue (also known as dengue haemorrhagic fever) is a potentially lethal complication that is characterised by fever, abdominal pain, persistent vomiting, bleeding and breathing difficulty.

Dengue fever is ranked by the World Health Organization (WHO) as the most critical mosquito-borne viral disease, globally. More than 40 percent of the world’s population, in more than 100 countries are at risk of dengue infection. The most significant dengue epidemics in recent years have occurred in Southeast Asia, the Americas and the Western Pacific. Each year, an estimated 390 million dengue infections occur around the world. Of these, 500,000 cases develop into dengue haemorrhagic fever – a more severe form of the disease, which results in up to 25,000 deaths annually. With more than one-third of the world’s population living in areas at risk of transmission, dengue infection is a leading cause of illness and death in the tropics and subtropics (WHO for Guidelines for Diagnosis, Treatment, Prevention & Control, 2009<). As many as 100 million people are infected yearly. Dengue is caused by any one of four related viruses transmitted by mosquitoes. There are no vaccines available to prevent infection with dengue virus.