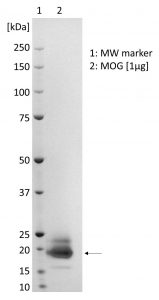 Myelin oligodendrocyte glycoprotein (MOG) may play a key role in infectious disease. The cellular receptor for Rubella virus (RV) is currently unknown. However, MOG has been shown to bind specifically to the E1 envelope glycoprotein of RV and an antibody against MOG blocked RV infection. Ectopic expression of MOG on the cell surface of HEK293T cells also rendered this nonpermissive cell line permissive for RV entry and replication. Therefore, MOG is likely a host-cell receptor for RV which may offer new approaches for the treatment of diseases caused by RV infection (Cong, et al., 2011).

MOG is a glycoprotein (type I integral membrane protein) possessing a single extracellular Ig variable domain. It is expressed mainly in the central nervous system (CNS) where it is believed to be important in the myelination of nerves (Johns & Bernard, 1999; Clements, et al., 2003). It is speculated to serve as a necessary adhesion molecule to provide structural integrity to the myelin sheath and is known to develop late on the oligodendrocyte (Pham-Dinh, et al., 1993). MOG also binds C1q and so may have an immune-related function as a regulator of the classical complement pathway (Vanguri & Shin, 1986).

Antibodies to MOG are associated with a subset of inflammatory demyelinating diseases of the central nervous system and myelin injury is thought to be closely related to neurodegenerative diseases. MOG could therefore be an early diagnostic criteria and therapeutic target for these diseases (Wang, et al., 2018).