This product is a recombinant Nipah virus Nucleoprotein (N), expressed and purified from mammalian cells with Manufactured for vaccine research and development of ELISA and rapid test immunoassays. 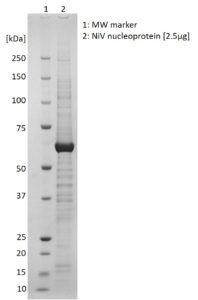 Nipah virus (NiV) is an emerging and highly pathogenic zoonotic paramyxovirus (genus Henipavirus) that is transmitted by its natural reservoir, Pteropid bats. NiV initially emerged in 1998 in Malaysia, and is now distributed in Asia, Africa, and the South Pacific Ocean. It causes deadly respiratory and encephalic diseases in humans. Because its mortality rate can exceed 70% in humans, its potential for human-to-human transmission and the absence of vaccine or specific antiviral treatment, it is classified as a biosafety level 4 (BSL-4) pathogen (Yabukarski et al., 2014).

NiV genomic RNA is condensed by a homopolymer of nucleoprotein (N), forming long helical nucleocapsids (NCs). The nucleoprotein encapsidates the genome protecting it from nucleases. Ribonucleoprotein complexes (RNP) are then used as a template for RNA synthesis by the viral RNA-dependent RNA polymerase (Yabukarski et al., 2014). Within the RNP, N is responsible for viral genome wrapping and facilitates viral replication and transcription (Lee et al., 2012).