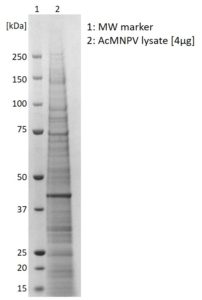 Baculoviruses are insect pathogenic viruses that are used for pest insect control and as tools to produce recombinant proteins. Autographa californica multi nuclearpolyhedrosis virus (AcMNPV) is the baculovirus vector most commonly used for recombinant protein production (Baculovirus Vector Expression Sysyem, BEVS) and is the type species for the Nucleopolyhedrovirus genus (Baculoviridae family). AcMNPV has a circular, double-stranded, supercoiled DNA genome of approximately 134 kbp, packaged in a rod-shaped nucleocapsid and contains at least 156 open reading frames (ORFs).

In order to make a recombinant baculovirus the gene of interest (e.g. GFP) is first cloned into a transfer vector containing sequences that flank the virus polyhedron (polh) gene and an essential gene (ORF1629) in the viral genome. Virus DNA and transfer vector are both co-transfected into the host insect cell, and homologous recombination between the flanking sequences occurs allowing the gene of interest to be inserted into the viral genome at the polh locus, restoring the function of the essential gene ORF1629 and placing the gene of interest under the control of the powerful polh promoter. Virus is then amplified and protein expression carried out in cultured insect cells. The cells used are generally Spodoptera frugiperda 9 (Sf9) or 21 (Sf21) insect cells, Trichoplusia ni (T. ni)-derived High Five (Hi-5™) cells or sometimes the insect larvae themselves.

The advantage of the BEVS is the potential for very high expression, which can account for 25-50% of total cellular protein. This translates to anywhere between 10 -100 mg of protein per 109 cells up to 1 g of protein per 109 cells. The protein is processed in a similar way to that produced in mammalian cells although the post-translational modifications may be less authentic. For example, native mammalian glycoproteins often have complex type N-glycans with terminal sialic acids, whereas insect cell-derived recombinant glycoproteins usually have much simpler side chains. These are known as paucimannosidic N-glycans, and are found at sites normally occupied by complex, terminally sialylated structures. Insect-derived N-glycans may also contain core α1,3-linked fucose residues, which are known to be allergenic (reviewed in Shi and Jarvis, 2007). However, head-to-head molecular, antigenic, and immunogenic comparison of mammalian (HEK293) and baculovirus-insect cell produced Hepatitis C virus envelope protein (E2) gave similar polyclonal antibody responses in mouse immunogenicity studies, both bound recombinant CD81 confirming similar folding and functionality and both proteins elicited comparable neutralization titers against heterologous isolates (although insect cell derived protein gave moderately stronger responses for homologous isolates) (Urbanowicz et al., 2019).

Baculovirus is therefore a very useful tool for the production of antigen or vaccines and this recombinant AcMNPV baculovirus lysate has been manufactured to provide researchers with a control sample to run alongside baculovirus-infected insect cell material in their assays.