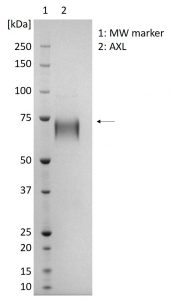 Human tyrosine-protein kinase receptor UFO (AXL) is a cell surface receptor enzyme encoded by the AXL gene (O’Bryan, et al., 1991; Wu, et al., 2014). The AXL protein is characterized by an extracellular structure consisting of two fibronectin type 3-like repeats and two immunoglobulin-like repeats along with its intracellular tyrosine kinase domain. It transduces signals from the extracellular matrix into the cytoplasm by binding to the vitamin K-dependent protein growth arrest-specific 6 (Gas6). It is also is a key facilitator of immune escape and drug-resistance by cancer cells, leading to aggressive and metastatic cancers (Davidsen, et al., 2017).

Ablation of AXL in mice has been demonstrated to enhance susceptibility to infection by Influenza A virus and West Nile virus. Additionally, fewer of the T cells matured to the stage where they could attack the virus in the mice. AXL is also a Dengue virus entry factor. Cells poorly susceptible to these viruses are robustly infected after ectopic expression of AXL receptors. Conversely, virus infection of susceptible cells is inhibited by antibodies or knockdown of AXL expression (Meertens, et al., 2012). AXL has also been shown to contribute to Lassa Fever virus entry in the absence of its major cellular receptor, extracellular matrix receptor dystroglycan (Fedeli, et al., 2018).

AXL is believed to be an entry receptor for Zika virus and does serve as an attachment factor for virus on the cell surface of human fibroblast cells (Persaud, et al., 2018; Meertens, et al., 2012).However, it has also been demonstrated that AXL knockout does not block the entry of Zika virus into primary human astrocytes and astrocytoma cell lines. The presence of AXL instead promotes infection in human astrocytes by antagonizing type I IFN signalling (Chen, et al., 2018).

AXL is therefore a useful target for studying nonspecific virus infectivity and has been proposed as a potential target for future antiviral therapies (Sarukhanyan, et al., 2018).