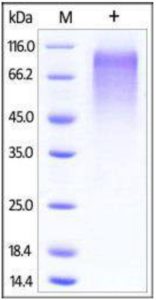 SDS-PAGE: HRSV (A) Glycoprotein G on SDS-PAGE under reducing condition. The gel was stained overnight with Coomassie Blue. RSV-G is fused with a polyhistidine tag at the C-terminus, and has a calculated MW of 26.2 kDa. The reduced protein migrates as 60-94 kDa in SDS-PAGE due to glycosylation. Purity of the protein is greater than 90%.

This Human RSV (A) glycoprotein G comprises His 67 – Arg 297 (Accession # P20895) from the Long strain, and is fused with a polyhistidine tag at the C-terminus. The total calculated MW is 26.2kDa. The RSV A gG protein is expressed in HEK293 cells, and reduced protein migrates as a band of 60-94kDa.

****SHIPPING AND STORAGE NOTIFICATION: This recombinant protein has been lyophilised to maximise stability. It is shipped at ambient temperature, and may be stored for up to 1 year at 4C prior to reconstitution. Following reconstitution, it should be stored at -80C. Extensive stability tests have shown no negative effects on antigen performance for 7 days of shipping at ambient temperature.