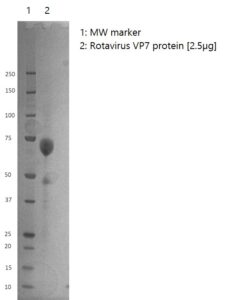 Rotavirus VP7 protein is expressed in HEK293 cells and purified from culture supernatant by Protein G and ion exchange chromatography.

Rotaviruses are the most common cause of diarrhoeal disease among infants and young children and nearly every child in the world is infected with a rotavirus at least once by the age of five (Dennehy, 2015; Bernstein, 2009). The virus is transmitted by the faecal-oral route. It infects and damages the cells that line the small intestine and causes gastroenteritis. Rotavirus also infects other animals, and is a pathogen of livestock. There are nine species of rotavirus (A, B, C, D, F, G, H, I and J). Humans are primarily infected by the species rotavirus A, and A–I species cause disease in other animals, including H in pigs, D, F and G in birds, I in cats and J in bats. Group A rotavirus (RVA) is the major cause of acute gastroenteritis (AGE) in young children worldwide (Esona & Gautam, 2015). Within rotavirus A there are different strains, called serotypes. As with influenza virus, a dual classification system is used based on two proteins on the surface of the virus. The glycoprotein VP7 defines the G serotypes and the protease-sensitive protein VP4 defines P serotypes and different combinations of these can be found. These proteins are found in the rotavirus capsid which is composed of three concentric protein layers. Proteins VP4 and VP7 comprise the outer layer. VP4 forms spikes, is the viral attachment protein, and is cleaved by trypsin into VP8* and VP5*. VP7 is a glycoprotein and the major constituent of the outer protein layer. Both VP4 and VP7 induce neutralizing and protective antibodies (Ludert et al., 2002).