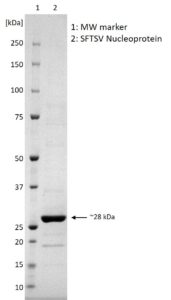 At The Native Antigen Company we have developed recombinant SFSTV Nucleoprotein, expressed in mammalian HEK293 cells. The protein comprises amino-acids 2-245, and incorporates an N-terminal His-tag linked via a 10 amino-acid glycine-serine linker. The protein is approximately 30kDa by SDS-PAGE analysis.

Severe fever with thrombocytopenia syndrome virus Nucleoprotein (SFTSV) is a segmented, negative-strand RNA Phlebovirus belonging to the Bunyaviridae family. SFTSV is a newly identified bunyavirus, which was first recognised in China in 2009 (Yu, XJ). Since 2009, reported cases of SFTSV infection have increased dramatically, occurring predominantly in China, South Korea and Japan, but also in the United states and Mediterranean countries.

SFTSV is a tick-borne virus that can be transmitted to humans by Haemaphysalis longicornis, a member of the Ixodidae family. H. longicornis, is endemic in the Asia-Pacific region and has a wide variety of hosts including livestock, birds, wild and domestic mammals. In some cases, animals infected with SFTSV do not exhibit clinical symptoms and are thought to act as intermediate reservoirs of the virus. Other ticks may act as vectors for SFTSV. However, bites from H. longicornis have been directly linked to cases of human SFTSV infection. Transmission of SFTSV from person-to-person has also been reported in some cases, due to contact with infected blood or mucus (Zhuang, L).

In humans the clinical symptoms associated with SFTSV infection include a high fever, abdominal pain, nausea, myalgia, a dramatic reduction of platelets and leukocytes, raised serum enzyme levels and, in some cases, multi-organ failure. Fatality rates due to SFTSV infection vary between 2- 30% and hospitalization may occur more frequently in the elderly and immunocompromised patients (WHO).

Currently, there is no licensed prophylactic vaccine or specific antiviral treatment for SFTSV infection. SFTSV is recognised by the World Health Organization as an emerging highly pathogenic virus, which presents a significant threat to human health.