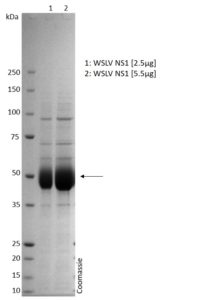 Wesselsbron virus NS1 protein is manufactured in human cell lines using state-of-the-art expression techniques, taking the same approach NAC used to produce its other popular NS1 proteins. This Wesselsbron NS1 protein is a native hexameric presentation. The hexamer is believed to be the biologically active form of NS1 involved in key aspects of flavivirus pathogenesis.

Wesselsbron disease (WSL) is an arthropod-borne flavivirus infection, primarily of domestic livestock (sheep, cattle, and goats) but also in humans, where it causes a non-fatal influenza-like illness. No fatal infections have yet been reported in humans. The Wesselsbron virus (WSLV) has not been well characterized, but it has the properties that are typical of a haemagglutinating flavivirus and is widespread in Africa.

Subclinical infections are believed to be common among people in sub-Saharan Africa with seroprevalence rates of 1% to 35%. However, cross-reactions between flaviviruses may cause false positive reactions in some cases. Serological tests available include hemagglutination inhibition (HI), complement fixation, virus neutralization and ELISA, and although there is a high degree of cross-reactivity with other  flaviviruses in HI tests, Wesselsbron titers are generally higher than other flavivirus titers. In 2010-2011, two cases of Wesselsbron disease were confirmed in livestock farmers during an outbreak of Rift Valley fever.

WSLV is one of a number of lesser known mosquito transmitted flaviviruses which are believed to have the potential to emerge (Smith, 2017). This WSLV NS1 protein has been manufactured in response to the unmet need for a highly purified, concentrated protein for use in further vaccine development and serological based diagnostic assays. The detection of the NS1 protein offers much higher fidelity across multiple flaviviruses where cross-reactivity can otherwise pose an issue.

****SHIPPING NOTIFICATION: All NS1 products are shipped at ambient temperature. Extensive stability tests have shown no negative effects on antigen performance for 7 days of shipping including several freeze/thaw cycles. Should customers desire shipment on dry ice, this can be performed for an extra fee, please get in contact with us by phone or email.****