Complement Regulator-Acquiring Surface Protein 1 (CRASP-1, CspA) is a 25.9 kDa multifunctional protein, encoded by the spirochete B. burgdorferi, which is carried by Ixodes ticks. Strain B31 is the type strain (ATCC 35210) for this organism and was derived by limited dilutional cloning from the original Lyme-disease tick isolate obtained by A. Barbour (Johnson, et al., 1984). Native CRASP-1 represents a homodimer with a previously unknown complex protein fold (Cordes, et al., 2005).

Borrelia species contain a large number of both linear and circular plasmids, some of which appear to be repeated or contain fragments of other genes. These regions may serve as pools of variability for the survival of Borrelia in its multiple environments during its life cycle. Multiple copies of sequences analogous to CRASP-1 genes have been detected in Borrelia plasmids. In addition, the sequence for CRASP-1 contains a repeated sequence folded into a stable stem loop structure, typical of RNA genes (Kraiczy, et al., 2004). 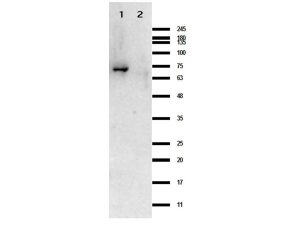