Canine Parvovirus 2 VP2 capsid protein is a recombinant protein, cloned and expressed in insect cells. The protein can be used as a calibrator in immunoassays for detection of CPV or as an antigen in CPV antibody titer analyses. The protein is also able to assemble into virus‑like particles. 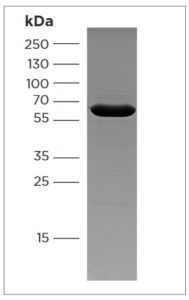 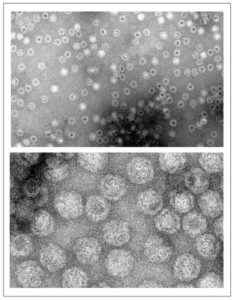 Canine Parvovirus 2 VP2 capsid protein is a recombinant protein, cloned and expressed in insect cells. It can be used as a calibrator in immunoassays for detection of CPV or as an antigen in CPV antibody titer analyses. The protein is also able to assemble into virus‑like particles.

Canine parvovirus (CPV) Canine parvovirus type 2 (CPV‑2) causes severe and highly contagious disease in dogs. CPV-2 is a non-enveloped single-stranded DNA virus in the Parvoviridae family, 20-26 nm in diameter with an icosahedral symmetry. It is a relatively new virus that was first recognized in 1978 and then spread worldwide in only 1-2 years (Carmichael, 2005). CPV is highly contagious and is transmitted by the faecal-oral route through contact with faeces from infected dogs or contaminated surfaces. It is the most important enteric virus infecting canids.

CPV‑2 has a non‑enveloped spherical capsid assembled from three proteins (VP1, VP2 and VP3). Capsid protein self-assembles to form an icosahedral capsid with a T=1 symmetry, about 22 nm in diameter, and consisting of 60 copies of a combination of VP1 (5‑6 copies) and VP2 (54‑55 copies). VP1 and VP2 are products of the same gene that are generated by alternative splicing of viral mRNA but VP1 has an additional 143aa in its N‑terminus compared to VP2. Empty capsids can be assembled from VP2 alone. VP3 is present only in full virions and is formed as the result of proteolytic cleavage of 19aa from the N‑terminus of VP2. The capsid encapsulates the genomic ssDNA and capsid proteins are responsible for the attachment to a host cell receptor. Phylogenetic analysis showed that all CPVs derived from a single common ancestor, and CPV-2 likely arose when it acquired mutations that allowed binding to the canine transferrin receptor (TfR) type-1. TfR plays a key role in the susceptibility of cells to infection by parvoviruses (reviewed in Miranda & Thompson, 2016). This attachment induces virion internalization predominantly through clathrin-endocytosis. Binding to the host receptors also induces capsid rearrangements leading to surface exposure of VP1 phospholipase A2-like region and nuclear localization signal(s). VP1 N-terminus might serve as a lipolytic enzyme to breach the endosomal membrane during entry into host cell. Intracytoplasmic transport involves microtubules and interaction between capsid proteins and host dynein. Exposure of nuclear localization signal may allow nuclear import of capsids.

The main method for controlling the disease in domestic animals is by vaccination. However, given the viruses ability for rapid evolution, the continued development of vaccines is likely to be an important area of research (reviewed in Miranda & Thompson, 2016).

This VP2 protein and corresponding antibodies have been manufactured specifically for Canine Parvovirus immunoassay development.