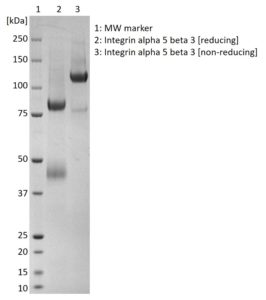 Integrins are heterodimeric integral membrane protein receptors composed of an alpha subunit and a beta subunit that function in cell surface adhesion and signaling. Each subunit crosses the membrane once, with most of the polypeptide residing in the extracellular space, and has two short cytoplasmic domains. A given chain may combine with multiple partners resulting in different integrins. Integrin alpha-5 or CD49e is a protein that in humans is encoded by the ITGA5 gene. Alpha chain 5 undergoes post-translational cleavage in the extracellular domain to yield disulfide-linked light and heavy chains that join with beta 1 to form a fibronectin receptor, recognizing the sequence R-G-D. The integrin alpha 5 and integrin alpha V subunits are encoded by distinct genes. Integrin alpha-V/beta-3 (ITGAV:ITGB3) is a receptor for cytotactin, fibronectin, laminin, matrix metalloproteinase-2, osteopontin, osteomodulin, prothrombin, thrombospondin, vitronectin and von Willebrand factor.

Numerous microorganisms utilize integrins to gain entry into cells. Integrin beta-3 (β3) or CD61 is a protein that in humans is encoded by the ITGB3 gene. Alpha V beta 3 is one of the most promiscuous integrins, as it binds to multiple ligands and also serves as a receptor for several viruses such as foot-and-mouth disease virus, adenovirus, and human immunodeficiency virus (Xiong et al., 2001).

Membrane fusion and attachment of pneumoviruses is achieved by the F protein which contains a putative integrin-binding motif (RGD) and binding to 5β1 and αv integrins are essential for cell-cell fusion and human metapneumovirus (hMPV) infection (Wei et al., 2014).

The specific receptors used for viruses within the Bunyaviridae remain mostly unknown; however, β3 and β1 integrins have been shown to be used as receptors for hantaviruses (Connolly-Andersen et al., 2007). It has been shown that β3 integrins facilitate the cellular entry of pathogenic hantavirus pulmonary syndrome (HPS) associated hantaviruses. Hantaviruses are enveloped viruses and their unique grid-like surface structure may require the use of integrins for entry into cells (Gavrilovskaya et al., 1998).

Other integrins have also been associated with virus entry into cells including ITGA5:ITGB1 which acts as a receptor for human metapneumovirus and as a coreceptor for parvovirus B19 (Weigel-Kelley et al., 2003). Integrin ITGAV:ITGB3 acts as a receptor for Herpes virus 8/HHV-8 (Garrigues et al., 2008), for Coxsackievirus A9 (Roivainen et al., 1994) and Cytomegalovirus/HHV-5 (Wang et al., 2005). Integrin ITGAV:ITGB3 also acts as a receptor for West Nile virus. Integrins were shown to modulate the infection efficiency of West Nile virus into cells and infection was substantially inhibited in Vero cells pretreated with blocking antibodies against αvβ3 integrin and its subunits by receptor competition assay. However, the binding of WNV to αvβ3 integrin does not specifically occur on the RGD binding site. Cells pretreated with antibodies against αvβ3 integrin also inhibited flavivirus Japanese encephalitis and to a lesser extent flavivirus dengue infections (Chu and Ng, 2004; Schmidt et al., 2013).