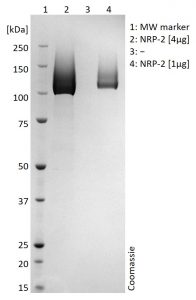 Recombinant human Neuropilin-2, His-tag (amino acids 23-864), expressed in HEK293 cells and purified from culture supernatant. The cytoplasmic tail and the transmembrane region have been replaced by a 9 amino acid glycine-serine linker followed by a 6x histidine tag. This recombinant protein has been confirmed to bind (by ELISA) to the human Cytomegalovirus (HCMV) pentameric gH/gL complex, as described by Martinez-Martin et al. The complex is composed of the gH/gL heterodimer bound to a trio of small glycoproteins encoded by UL128, UL130, and UL131 (also known as UL131A).

There are two homologs of the NRP family, NRP1 and NRP2, which are 130 kDa single-pass transmembrane glycoproteins that act as non-tyrosine kinase co-receptors. They contain 4 distinct domains including a CUB domain, a FV/FVIII domain, a MAM domain and a domain that contains the transmembrane and short cytoplasmic region. Both homologues can homo- and hetero-multimerize; the encoded transmembrane protein binds to SEMA3C and SEMA3F proteins and interact with vascular endothelial growth factor (VEGF) and PLGF-2 isoform of PGF. NRP-2 is believed to play a role in cardiovascular development, axon guidance and tumorigenesis.

NRP_2 is also a receptor for human Cytomegalovirus pentamer-dependent entry in epithelial and endothelial cells. It was identified using a high-throughput avidity-based extracellular interaction screen (AVEXIS), in which recombinant single-pass transmembrane proteins were observed in vitro for interactions with recombinant trimer and pentamer. Following its identification, NRP-2 was determined to be essential for pentamer-dependent HCMV infection of endothelial and epithelial cells. NRP-2 also directly interacts with Human T-lymphotropic virus-1 (HTLV-1) surface glycoprotein SU, a furin-processed heparin-binding protein, and is essential for HTLV-1 viral entry. Epstein-Barr Virus (EBV) infection of nasopharyngeal epithelial cells is mediated by binding of NRP-1 to the EBV glycoprotein B (gB) protein. However, while gB binds tightly to both proteins, NRP-1 enhances EBV infection while NRP-2 impairs EBV infection.