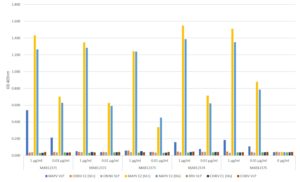 The MAYV capsid is composed of 240 capsid protein copies within a lipid membrane, through which 80 capsid spike proteins penetrate. These spike proteins are composed of E1 and E2 glycoproteins, which form heterodimers shortly after translation and then associate into trimers as the virions assemble. The E2 glycoprotein is primarily involved in attachment to host cells, while the E1 protein mediates the fusion of MAYV and host cell (Choi et al., 2019). E1 and E2 on the surface of virions are targets of anti-MAYV humoral responses.

Since MAYV’s characterisation in 1954 on the island of Trinidad, it has caused major outbreaks in South American countries, and reports have suggested that cases of MAYV infection may be higher than previously documented owing to similarities between symptoms of the co-circulating Mayaro, Dengue and Chikungunya viruses (CDC).

The Mayaro virus (MAYV) is a positive-sense, single-stranded RNA virus, of the alphavirus genus of the togaviridae virus family. MAYV is closely related to other the alphaviruses such as Chikungunya, Semliki Forest and Ross River, that also produce a dengue fever-like illness, accompanied by long-lasting arthritis.