Mammalian expressed recombinant MXRA8 protein, the cell surface receptor for alphaviruses. Greater than 95% purity and shown to bind to Chikungunya Virus-like particles. We also offer this protein with a mouse Fc tag. 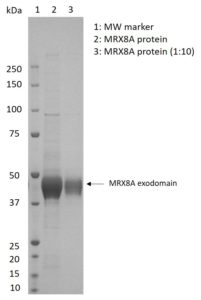 ELISA: Various amounts of The Native Antigen Company’s CHIKV-VLP (1ug, 200ng, 40ng and 10ng per well) were coated onto a Maxisorp ELISA plate, then blocked with 2% BSA. After blocking the plate was incubated with 1ug/well of MXRA8 (REC31648). The plate was then probed for MXRA8 bound to CHIKV-VLP with a mouse anti-His-tag antibody as primary antibody and anti-mouse-IgG-HRP as secondary antibody. Coating of control wells (CHIKV-VLP for no MXRA8 added, no primary antibody and no secondary antibody controls, MXRA8 for MXRA8 coating) was done at 1ug of antigen per well. 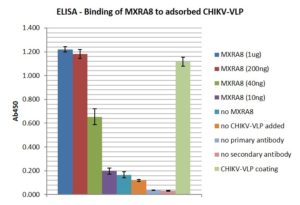 Human MXRA8, also known as DICAM, is a transmembrane adhesion protein that is expressed on the endothelium of many tissues (1).

It has recently been shown that MXRA8 acts as a viral entry receptor for multiple arthritogenic alphaviruses that cause debilitating acute and chronic musculoskeletal disease in humans, including Chikungunya virus (CHIKV), Mayaro virus and O’nyong’nyong virus. Blocking this interaction with antibodies has been shown to reduce the severity of infection with these viruses in mouse models, and therefore MXRA8 is now receiving attention as a possible therapeutic target.

X-ray crystal structure (2.2 Å) and cryo-electron microscopy (4-5 Å) reconstructions of MXRA8 bound to chikungunya (CHIKV) virus-like particles and infectious virus have shown that MXRA8 has an unusual Ig-like fold topology and complex quaternary binding site that spans the CHIKV E2 and E1 proteins. Two binding modes were observed with the fully mature CHIKV VLP, with one MXRA8 binding with unique contacts. Only the high-affinity binding mode was observed in the complex with infectious CHIKV, as viral maturation and the presence of E3 appeared to affect the mode of MXRA8 binding (Basore et al., 2019).

We are pleased to make available highly purified recombinant MXRA8 produced in our mammalian expression system using HEK293 cells. Alongside our recombinant alphavirus proteins, this reagent offers an excellent model for studying alphavirus infection. We have demonstrated that recombinant MXRA8 binds to our recombinant Chikungunya Virus-like particles, mimicking the natural interaction during viral infection, and therefore providing a simple to use in vitro model to assess potential therapeutic molecules that block the virus receptor interaction (Basore et al., 2019).

MRXA8 is available in two different forms to provide maximum flexibility to researchers. We also offer this protein with a mouse Fc tag.