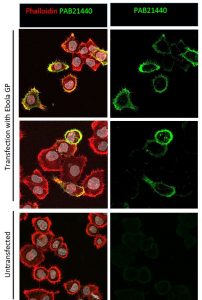 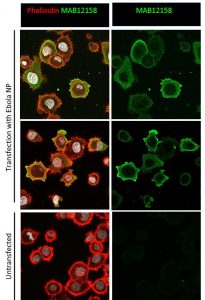 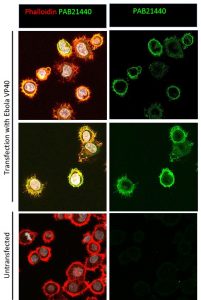 Immunofluorescence data: Hela cells were transfected with plasmids expressing Ebola Zaire glycoprotein, nucleoprotein or VP40, seeded on coverslips and incubated for 48 h. Control coverslips consisted of untransfected cells. After fixation with 4% PFA, samples were stained with PAB21440. Antibody was used at a dilution of 1:500 and Triton X-100 was used as detergent. Imaging was performed using a Leica SP5 confocal microscope (Images by Virology Research Services Ltd).

Read our blog for more information. 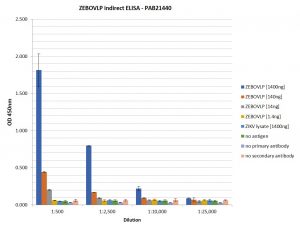 Direct ELISA: A Nunc Maxisorp plate was sensitized with ZEBOVLP in various amounts, or Zika virus lysate at 1400 ng/well in 200mM carbonate buffer pH9.2. Then, plate was blocked with 2% BSA in carbonate buffer. Primary antibody was used at various concentrations in PBS-T plus 2% BSA. AbD Serotec’s STAR88P antibody was used as detection abtibody at 1:4,000 dilution. All steps were carried out for 1h at room temperature. Three wash steps using PBS-T were used in between each step. 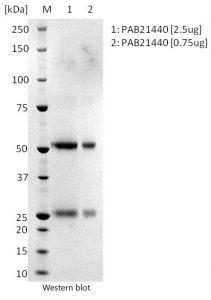 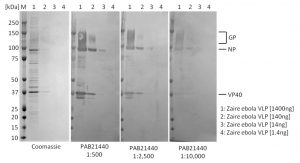 The Native Antigen Company Sheep anti Ebola virus antibody has been raised against recombinant EBOV virus like particles (VLPs), expressed in mammalian cells. These VLPs are comprised of EBOV Nucleoprotein (NP), glycoprotein (GP) and the VP40 protein. The antibody has been shown to react with each of the components of the VLP in Western blotting analysis, when used at a 1/2,500 dilution.

Ebola virus is a member of the filovirus family which are single-stranded negative sense RNA viruses. Virions are mainly composed of the matrix protein VP40, the nucleoprotein NP which encases the viral nucleic acid, and the glycoprotein GP. Members of this family include Zaire, Sudan and Reston Ebola viruses and Marburg virus.

The Zaire subtype of the Ebola virus family is currently the most important in relation to outbreaks of disease in humans. This subtype has been responsible for the largest ever outbreak of EHF, which started in West Africa in 2014, and was finally declared over only in early 2016. The Boende-Lokolia strain was identified at the beginning of this outbreak in the villages of Boende and Lokolia in the Democratic Republic of Congo. No effective treatments or vaccines have been approved by any governing body as of 2017.