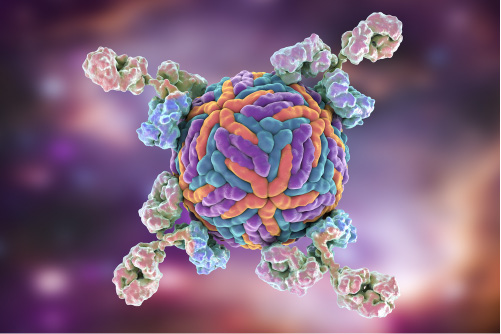 A recent study published by Langerak et al. tested for the seroprevalence of Zika virus in Suriname populations and evaluated the comparative effectiveness of using a commercial ELISA and a standard Virus Neutralisation Assay. Here we discuss the study, its results, and the implications on using ELISA kits for serological studies of Zika virus.

A study, recently published by Langerak et al. evaluated the seroprevalence of Zika virus (ZIKV) in both urban and rural populations in Suriname during 2017. Participants were tested for the presence of IgG antibodies to ZIKV using both a commercial ELISA kit and a virus neutralisation assay. A key aim of the study was to assess the accuracy of ELISA assays for ZIKV IgG analysis, given previous reports of high levels of cross-reactivity of these assays with Dengue virus in Dengue endemic areas.

Previous studies in Micronesia and French Polynesia had reported seroprevalences of 73% and 49% respectively.  However these were carried out with first-generation ELISA assays, and did not use virus neutralisation assays to validate their results.   While cross-neutralisation can occur when using from virus neutralisation tests (VNT), they measure functional antibodies that are capable of blocking ZIKV infection of cells and are therefore a more accurate measure of immunity than binding antibodies detected by most ELISAs.

In the Suriname study, samples were taken and tested from two cohorts:

1) 44 blood samples were taken from a “pre-ZIKV cohort” (patients presenting with fever between 2012 and 2014, prior to the circulation of ZIKV in Suriname)

2) 770 blood samples were tested during the 2017 outbreak from an urban area and two rural villages in the rain-forest.

The problem described in this publication can now be overcome with new generation ELISA assays for ZIKV antibodies. Utilising in-house developed mammalian recombinant proteins, and a novel assay design, The Native Antigen Company has developed a new ZIKV total antibody assay, which demonstrates a dramatic improvement on first generation tests. The total antibody assay has both sensitivity and specificity of >90%, even in Dengue endemic regions. With an assay time of less than 2 hours, and the ability to test samples from any species, this kit presents a new standard for serological studies of ZIKV prevalence.