Borrelia burgdorferi OspC protein is a recombinant antigen fused to a His-tag and produced in E. coli to high purity. 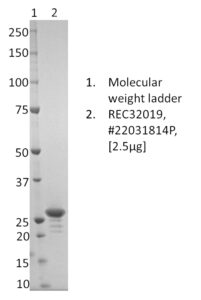 Borrelia burgdorferi OspC protein is a recombinant antigen fused to a His-tag and produced in E. coli to high purity.

Outer Surface Protein C, or OspC, is a 22 kDa immunogenic protein encoded by the spirochete Borrelia burgdorferi, which is carried by Ixodes ticks (Caine, et al., 2017). Strain B31 is the type strain (ATCC 35210) for this organism and was derived by limited dilutional cloning from the original Lyme-disease tick isolate obtained by A. Barbour (Johnson, et al., 1984). B. burgdorferi OspC’s function is not known, but it is located by lipid-anchoring sites on the outer cell membrane, although it is not believed to be associated with lipid rafts (Grimm, et al., 2004; Toledo, et al., 2014).

OspC has been shown to be a requisite for B. burgdorferi to establish mammalian infection as well as for spirochaetal transmission from ticks to mammals. OspC expression begins during blood feeding by the nymphal tick and continues to be produced in the early stages of infection in the mammal host and is highly immunogenic in mice. As one of the strategies to evade host humoral responses, spirochetes downregulate OspC production in response to anti-OspC antibodies within 2 to 3 weeks after infection in mice (Grimm, et al., 2004).

OspC has also been proposed to play roles in promoting survival and/or dissemination of spirochetes within the mammalian host. For example, OspC binds to a tick salivary protein, Salp15, which can protect spirochetes from complement- and antibody-mediated killing (Hovius, et al., 2008). OspC is also shown to bind host plasminogen and this phenotype correlates with invasiveness of spirochetes in mice (Tilly, et al., 2006).

OspC has also been shown to be required for B. burgdorferi to establish infection in both immunocompetent and SCID (lacking B and T cells) mice and has been proposed to facilitate evasion of innate immune defences. An OspC knockout mutant was cleared within the first 48 h of infection in a murine host, suggesting a protective role of OspC against innate defences. Constitutive expression of heterologous lipoproteins in the OspC mutant was shown to restore infection in SCID mice, suggesting that OspC may also play a nonspecific structural role for B. burgdorferi (Smith, et al., 2018). OspC also has antiphagocytic properties, through aiding spirochete evasion of mononuclear phagocytes during early infection in mammals (Carrasco, et al., 2015).