Rabbit Anti-Borrelia Burgdorferi P35 antibody is a polyclonal recognising Borrelia burgdorferi sensu stricto. The antibody is suitable for use in ELISA and Western blotting applications. 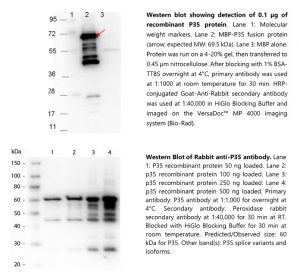 Anti-Borrelia burgdorferi P35 antibody is a polyclonal antibody, prepared against P35 from the spirochete B. burgdorferi, for use in ELISA and Western blotting applications.

The bba64 gene of Borrelia burgdorferi encodes a surface-exposed lipoprotein, called P35. The 35-kDa antigen has been shown to be a statistically significant marker in IgG immunoblots in a study of patients with early Lyme disease who presented with erythema migrans (Fikrig, et al., 1997).

P35 expression is induced in the tick vector during feeding and maintained during infection of the vertebrate host. The expression of a majority of the proteins expressed in early Lyme disease is affected by pH, being abundantly expressed at pH 7.0 (resembling the tick mid-gut pH of 6.8 during feeding) but only sparsely at pH 8.0 (a condition closer to that of the unfed tick mid-gut pH of 7.4) and the encoding genes may be coregulated (Gilmore Jr, et al., 2010). Borrelia may also change its antigenic composition in its need for adaptation to stresses imposed by changes in conditions from cycling between its arthropod and mammalian hosts (Fikrig, et al., 1997).

The expression of bba64 is down-regulated in the absence of RpoS which has also been shown to be the sole determinant of differential bba64 expression in cultured spirochetes. P35 expression in B. burgdorferi is upregulated in the stationary growth phase, and influenced by a temperature of 34°C (but not 24°C) (Gautam, et al., 2008).