Specific against Streptolysin O of Group A, C, and G origins. In hemolytic streptococci infection, the antibodies to toxins secreted from the bacteria increase. For the diagnostic confirmation of SLO production by the infection, the measurement of anti-Streptolysin O is most widely used. 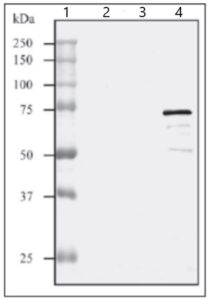 Western Blot: WB analysis of culture supernatant from GAS strain Sa and GCS strain H46A with the anti-SLO antibody The antibody was used at 1/2,000 dilution. Most of SLO in culture medium of GAS strain Sa is proteolytically degraded (Lane 3), accounting for low activity level of SLO in the culture of this strain. The two faint bands below SLO band (Lane 4) are partially degraded SLO. 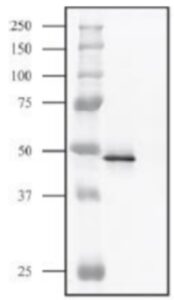 Western Blot: WB analysis of concentrated culture supernatant of GAS strain Sa with the anti-SLO antibody. Culture supernatant was approximately 1,000~2,000 fold concentrated from culture medium by ammonium fractionation and heat-precipitation. The SLO of GSA strains is degraded by an exoprotease called streptococcal pyrogenic exotoxin B and both the concentration and size of SLO in culture medium is decreased from native one.

Streptolysin O (SLO) is a membrane-damaging extracellular toxin produced by hemolytic streptococci. In the hemolytic streptococci infection, the antibodies to various proteins secreted from the bacteria such as toxins increase. For the diagnostic confirmation of SLO production by the infection, the measurement of the antibody, ASLO (Anti-Streptolysin O), is most widely used. Most of the ASLO sold in the current market were obtained by immunizing with SLO purified from the culture supernatant of hemolytic Streptococci. But the SLO preparations were contaminated with other secreted proteins such as NADase. This product is highly specific to SLO because of the purity of immunogen used.

Group A Streptococci (GAS) are important human pathogens and millions of children each year develop GAS pharyngitis. Although throat infection is typically benign, it can be complicated by the development of acute and chronic rheumatic heart disease. Invasive GAS infection occurs less frequently than pharyngitis but causes significantly more morbidity (Stevens, 1996).

GAS produce two hemolysins (hemolytic exotoxins) that may contribute to pathogenesis. These are streptolysin O (SLO; slo), which is oxygen-labile, and streptolysin S (SLS; sagA), which is oxygen-stable. SLO is part of the thiol-activated cytolysin family. It is hemolytically active only in a reversibly reduced state. Partly as a function of its size it is antigenic, so its antibody antistreptolysin O can be detected in an antistreptolysin O titre. SLO mainly affects the breaking of red blood cells (hemolysis) and is mostly produced by the GAS and Streptococcus dysgalactiae. SLO interacts with cholesterol in the membrane of eukaryotic cells (mainly red and white blood cells, macrophages, and platelets) and usually results in β-hemolysis under the surface of blood agar. It targets myocardial cells, epithelial cells, platelets, and neutrophils and is thought to prevent the host immune system from clearing infection. The cytotoxic effects of SLO may also protect GAS from phagocytic killing and enhance bacterial virulence, particularly of strains that may be relatively deficient in hyaluronic acid capsule (Sierig et al., 2003).